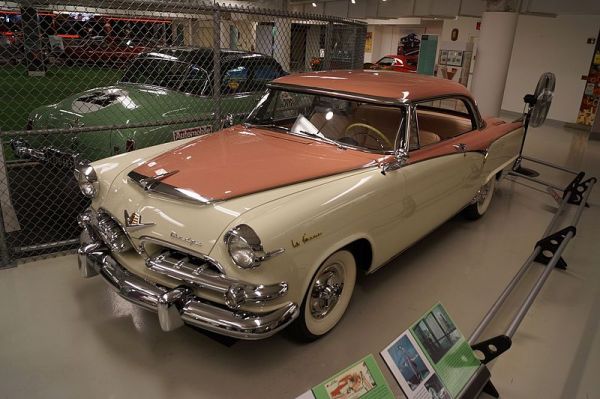 We’ve seen many examples of unnecessarily gendered products and the “pink tax,” which is when a product designed to appeal to women costs more, even if there is no difference besides the color. Here are a couple of examples from history that played to the stereotype and backfired. The Dodge La Femme was a full-size sedan designed just for women. That mainly meant color and accessories. The 1955 La Femme was two-toned pink, inside and out.

The interior of the car also received attention and features. 1955 La Femme interiors were upholstered in a special tapestry material featuring pink rosebuds on a pale silver-pink background and pale pink vinyl trim. The La Femme came with a keystone-shaped, pink calfskin purse that coordinated with the interior of the car. The purse could be stowed in a compartment in the back of the passenger seat,[3] and its gold-plated medallion faced outward. This brushed-metal medallion was large enough to have the owner’s name engraved on it.

Each purse was outfitted with a coordinated set of accessories inside, which included a face-powder compact, lipstick case, cigarette case, comb, cigarette lighter, and change purse, all made of either faux-tortoiseshell plastic and gold-tone metal, or pink calfskin and gold-tone metal, and all were designed and made by “Evans”, a maker of women’s fine garments and accessories in Chicago.

On the back of the driver’s seat was a compartment that contained a raincoat, rain bonnet, and umbrella,[4] all made from a vinyl patterned to match the rosebud interior fabric. Marketing brochures stated that the car was made “By Special Appointment to Her Majesty… the American Woman.”

The Dodge La Femme reappeared in 1956 in lavender and purple tints. However, neither model sold all that well, and only about 2500 cars were produced in total. All these years later, that small run means that the Dodge La Femme is a rare, sought-after vehicle. There’s even a registry for them. -via Weird Universe

Almost exactly the same thing happened with Lionel trains. Alan Polinsky wrote in response the Pink Tool Set post and told me about the Lionel Girls’ Train Set of 1957. The pink engine and pastel cars were supposed to appeal to little girls, but did not sell well. It turns out little girls wanted their trains to look as realistic as boys do. While the product itself was a bust and went out of production, that very rarity caused those pink engines to become collector items fifty years later. If you have one, you can get a pretty penny for it on eBay. -Thanks, Alan!