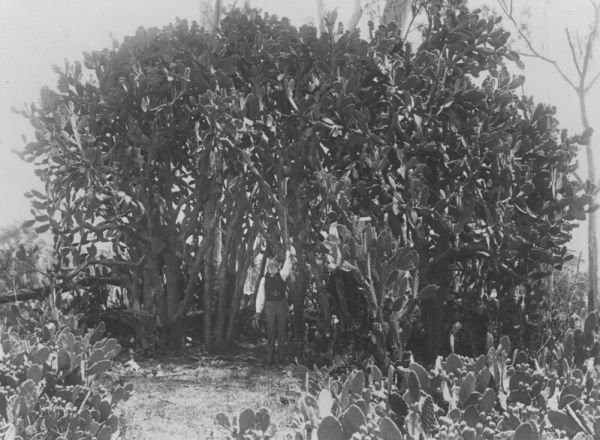 Ever since Europeans colonized Australia, that country has been fighting invasive species that threaten its unique ecosystem. Some of that was accidental, but other invasive species were deliberately introduced with disastrous results. The British imported the first prickly pear cactuses in 1788 to establish a plantation in New South Wales. The purpose of the cactus was to feed cochineal insects which produce a lucrative red dye, but that never happened. Cochineal insects didn’t thrive in Australia. What happened was that prickly pears escaped the plantations and spread all over the desert and into farmland. By 1880, farmers were throwing their hands up because prickly pears had taken over their land, often growing 20 feet high. Chopping them up did no good, because each part of the cactus can root and regenerate. Trying to poison them only caused other problems.

It took until 1932 to get the prickly pears under control. But you might have guessed that the solution was to import a unique species of insect to kill it, which later caused problems when the scheme was tried in other countries. It’s a story told again and again, like the woman who swallowed a fly. Read about the prickly pear invasion and the battle to defeat it at Amusing Planet.