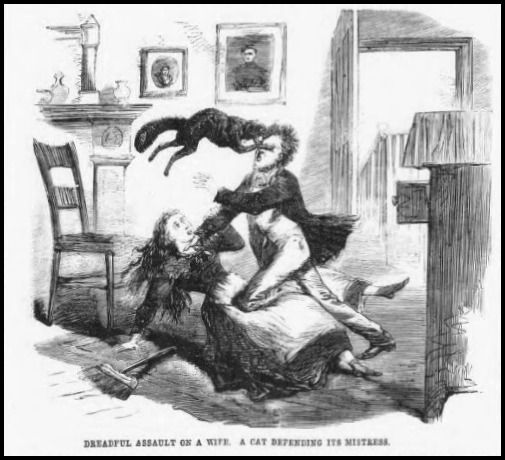 A blog post from Mimi Matthews is an overview of cases from the Victorian era of pets defending a woman from spousal abuse. It opens with the trial of George Amey, who assaulted his estranged wife, Isabella. George no longer lived with Isabella, but visited her in the home he had left, where she lived with her cat Topsy. An altercation began, and George threw Isabella down and started to strangle her.

George might have killed Isabella if not for Topsy’s sudden—and rather unexpected—intervention. Upon seeing her mistress being ill-used, the faithful cat sprang into action. As the Illustrated Police News relates:

“The wife told the warrant-officer Roskelly that while on the ground and screaming, a favourite cat, named Topsy, suddenly sprang on her husband and fastened her claws in his eyes and her teeth in his face. Her husband could not tear the cat away, and he was obliged to implore her to take the cat from him to save his life.”

George was arrested, charged, and ultimately sentenced to prison for one month.

This is just the first of three cases that explain why women alone tend to become cat ladies or dog ladies. Although, in one case, it was the man’s own dog that prevented him from killing his wife. -via Strange Company