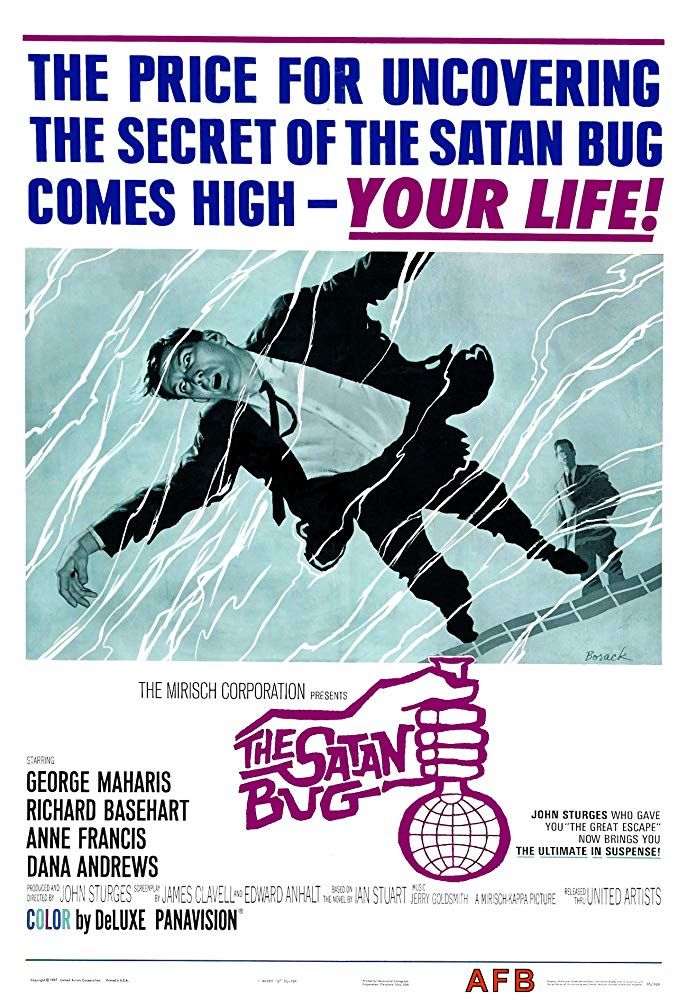 Ah, back to the 1960’s. The sci-fi films of that decade were becoming slicker by the year and all were now in color. There were breakout films such as Fantastic Voyage and Planet of the Apes, but there were also lesser-known films that were in the same league, in this case the 1965 thriller The Satan Bug. A typical review on the IMDB runs thus:

_THE SATAN BUG is a very competent treatment of a CBW (chemical and biological warfare) nightmare scenario: Somebody steals from a DOD fortress several flasks of the deadliest viruses ever developed. George Maharis is there to try to track down the baddies, as is Anne "Forbidden Planet" Francis. And the prime psycho villain? Richard "Admiral Nelson" Basehart! His paranoid stooge? Ed Asner! One of his thugs? Gomer Pyle’s Frank Sutton! Dana Andrews is chief spook presiding over a scenario that features the end of the world accomplished not by atoms, but by microbes. For its time it was a very alarming and fast paced thriller_. Bear in mind that in 1965 the main concern was nuclear war and not biological warfare. The new concept of biological warfare made it all the scarier to the audiences.

Happily, YouTube has the full original film available, in full-size format, and this is embedded below. Though this same theme of deadly microbes was used in later films such as The Andromeda Strain, the all-too-real threat of an Ebola pandemic and ongoing CBW development around the world makes this film all the more timely today. FWIW, it was a real hit in 1965.

Keep Your Dog Occupied with Treat Toys From West Paw

Save the Date 4/21: The Brave New World of Design on @designmilk IGTV

Bettering Your Health: 5 Small, Pill-Sized Ways to Do Just That