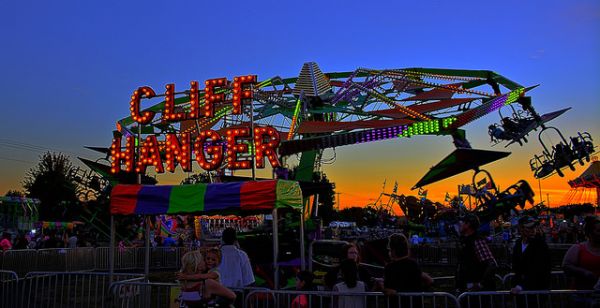 We are now in the season for county and state fairs, and the rickety traveling carnivals that accompany them. Thrill rides are as popular as ever, with the scariest ones drawing the longest lines. Mark Shrayber is terrified of carnival rides, yet he can’t help but ride them. Go figure. In case you haven’t been to a carnival in a while, he helpfully describes his experiences with the scariest thrill rides, with videos of each ride in case his description isn’t clear enough. He ranked the Cliffhanger as number one.

Sometimes called Superman (although not nearly as scary as the rollercoaster), this ride puts you flat on your stomach and then swings you around higher and higher with each passing second. It’s fun and freeing in theory, but if you’re an anxious person you’ll spend the entire journey wondering whether you’ll a) fall off because you’re not secured in place or b) actually hit the ground when the ride rushes you to meet it face-first.

At one fair, a ride attendant (16, I asked) did not lock down my restraint and then decided not to do a security check because, why bother, you’re just going 40 feet into the sky at high speeds. She started the ride and I had to spin by her three times screaming “I’m going to die!” before she stopped the ride and sauntered by to help. “Whoops,” she said, comforting me. “You have no idea how often that happens.”

That’s a little misleading; all eight rides in this list are ranked at number one. Read Shrayber’s thrill ride stories, complete with NSFW text, at Uproxx.

Rating The Scariest Rides At The Fair, Ranked By An Anxious Man is 5.0 / 5 Votes: 5
Please wait...
Loading...
Related articles