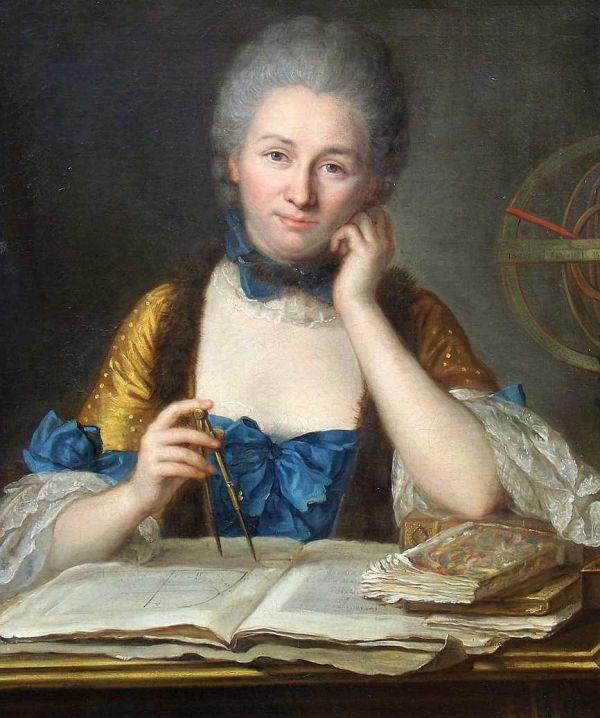 Gabrielle Emilie le Tonnelier de Breteuil was born into the French aristocracy in 1706. Her station in life allowed her to be fully educated, but that plus her natural intelligence and curiosity were no match for the 18th-century bias against women in science. Still, the Marquise du Châtelet, as she was titled after her marriage, pursued math and physics with a passion. In 1744, she began a project to translate Sir Isaac Newton’s Philosophiæ Naturalis Principia Mathematica (Mathematical Principles of Natural Philosophy), which was a long and complicated tome in three volumes, and was only available in Latin and English. While she completed the French version in a year, she also had some questions about its contents. The book needed to be updated with more data and the advances in science that had occurred since its first publication in 1687. The marquise worked on her commentary daily, but was in no hurry until 1749, when she ran into another hurdle for women scientists: du Châtelet found out she was pregnant. At age 42, aristocrat or not, that might well be a death sentence. She started working on her project almost around the clock, with very little sleep and no socializing at all.

Her new regimen was grueling but effective, and she blamed herself for not adopting it sooner. “Had I led this life since I came to Paris, I would have finished by now,” she wrote Saint-Lambert. “But I began by having many engagements; I gave myself up to society in the evenings. I believed that the day would suffice.”

As her pregnancy continued, however, du Châtelet became increasingly aware that she was running out of time. “I felt that the only way to avoid all these intersecting inconveniences and to make the most of my trip to Paris…was to sequester myself absolutely, to stake my all, and to devote all my time to my book.”

Her commitment eventually paid off. Sometime in the first three days of September, du Châtelet finished her commentary. On September 4, she gave birth to a daughter. Six days later, du Châtelet was dead.

Emilie du Châtelet led a fascinating life both in her devotion to science and mathematics and in her personal life. For example, when she gave birth to her fourth child, her husband, her longtime lover Voltaire, and the father of her child were all three in attendance. Find out why she was so determined to finish her commentary on Newton’s work at Narratively. -via Digg