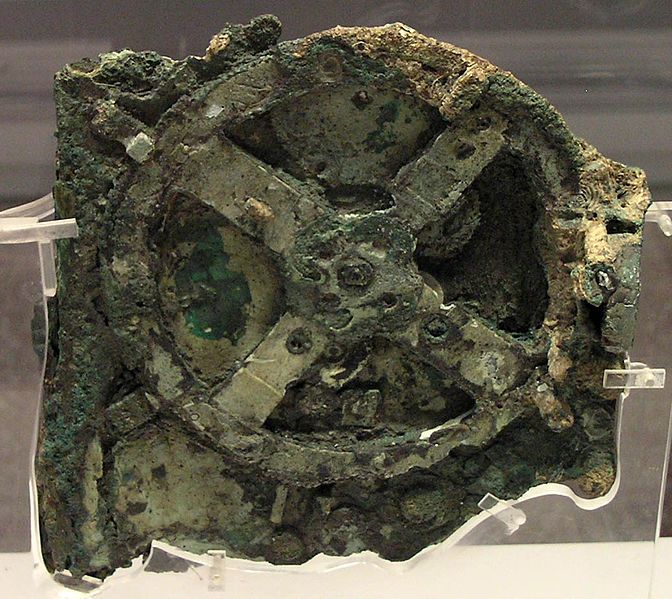 In 1902, Greek archaeologist Valerios Stais revealed his findings about an object found in a shipwreck off the coast of Greece near Antikythera. Seeing a gear embedded in the strange object, Stais deduced that the object in question was an astronomy-based clock.

He was in the minority—most agreed that something so sophisticated must have entered the wreck long after its other 2,000-year-old artifacts. Nothing like it was believed to have existed until 1,500 years later.

It turns out, however, that Stais’s insight about the object was correct. The object, which we now call “Antikythera mechanism”, is in fact, an astronomy-based clock.

In 1951, British historian Derek J. de Solla Price began studying the find, and by 1974 he had worked out that it was, in fact, a device from 150 to 100 BC Greece. He realized it used meshing bronze gears connected to a crank to move hands on the device’s face in accordance with the Metonic cycle, the 235-month pattern that ancient astronomers used to predict eclipses.

By 2009, modern imaging technology had identified all 30 of the Antikythera mechanism’s gears, and a virtual model of it was released.

Understanding how the pieces fit goes together confirmed that the Antikythera mechanism was capable of predicting the positions of the planets with which the Greeks were familiar—Mercury, Venus, Mars, Jupiter and Saturn—as well as the sun and moon, and eclipses. It even has a black and white stone that turns to show the phases of the moon. Andrew Carol, an engineer from Apple, built a (much bigger) working model of the device using Legos to demonstrate its operation.

Learn more about this fascinating device over at Big Think.