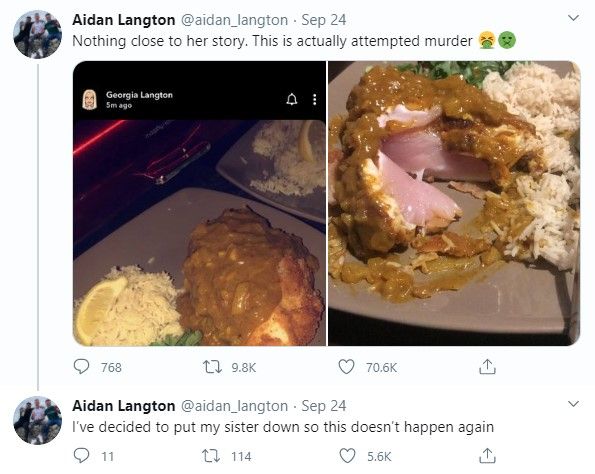 Georgia Langton attempted to recreate the chicken katsu curry served in Wagamama (a British restaurant chain) and it seemed like a success.The dish looked tasty when it was served at the dinner table, but when the family tucked in, they found out the secret of the chicken katsu curry that hides beneath the sauce and the chicken breading: it was undercooked. Severely undercooked that her brother, Aidan, called her out and jokingly accused her of “attempted murder.”

Posting side-by-side images of the dinner she had posted on Snapchat and what he found when he cut into the food, @Aidan_langton wrote on Twitter : “Nothing close to her story. This is actually attempted murder.

“I’ve decided to put my sister down so this doesn’t happen again.”

The tweet gained more than 45,000 likes as @georgialangton_ came forward to own up to the blunder, saying: “Safe to say I’m never deep fat frying again nearly killed my family”, before insisting it was a rare blunder, stating: “Btw I’m actually a good cook just had a moment of weakness.”

I wonder what they ate that night.