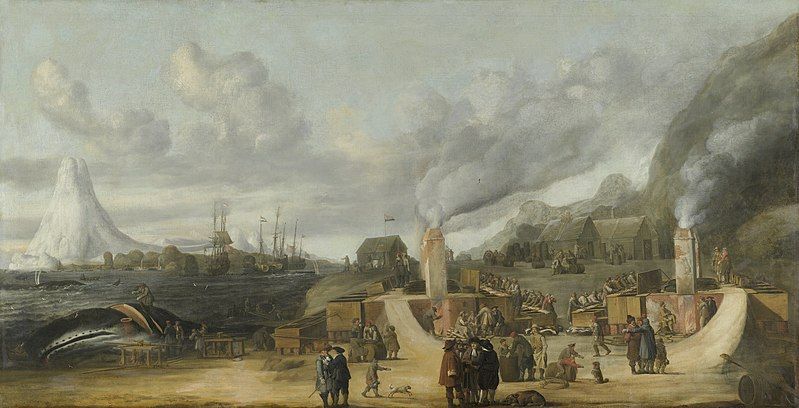 There was once a Dutch settlement on an island in Svalbard called Smeerenburg which derived most of its trade on bowhead whales, known for having a lot of blubber. And so it became known as Blubber Town.

Despite only existing for over 40 years after which it was abandoned by its founders, tales of its bustling streets lined with churches, shops, and bakeries circulated and were inflated until it became a myth of its own.

Smeerenburg began with a happy accident. Searching for a Northeast Passage in 1596, famed navigator Willem Barentsz (1550–1597) stumbled upon the Svalbard islands. Here, along the rocky coasts, he found countless bowhead whales and saw an opportunity. The Dutchman planted a flag and claimed the lucrative waters for the United Provinces.

In 1619, having gained a near monopoly in whale trade, the Dutch established a foothold in the Arctic and founded the town Smeerenburg.

Word of a booming Blubber Town spread among whalers in the Arctic. There was no agreement on how large it had grown and when it was deserted. Most believed it was a bustling place.

By the eighteenth century, written accounts make clear that Smeerenburg was abandoned, but the myth of its former grandeur continued. In reality, Smeerenburg was never more than a desolate outpost.

Now, Smeerenburg has become kind of a tourist destination for those going on Arctic cruises.

In 1973 its ruins became part of Norway’s Nordvest-Spitsbergen national park. Visitors are warned against walruses and then invited to wonder at the brick foundations of the tryworks.

They can gape at the so-called “blubber cement” that still outlines the place where enormous cooking vessels once stood. The result of mixed whale oil, sand, and gravel, the asphalt-like substance is the most tangible remnant of Blubber Town.