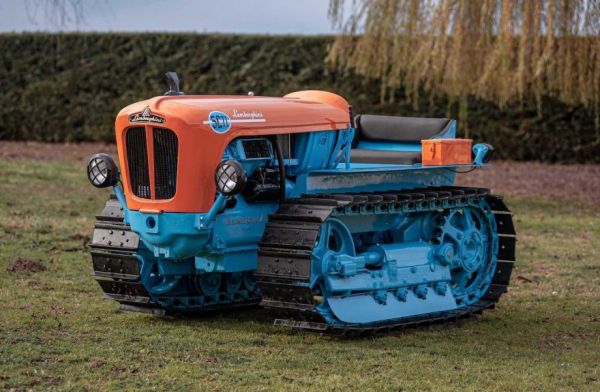 This is a restored Lamborghini 5C TL tractor that was built in the 1960s. Owning this would make you the envy of all the guys down at the co-op! If you’re not a gearhead, you might be surprised to know that Lambourgini built tractors before the company ever built cars.

Ferruccio Lamborghini grew up on the family vineyard and was always fascinated by farm machinery. After World War II he designed tractors that would get Italy back in its feet again. He became so wealthy that he could afford nice sports cars, which eventually included Ferraris. But as an engineer, he wasn’t happy with his Ferrari, and let the company founder, Enzo Ferrari, know about it.

He took his grievances to Enzo Ferrari and the two famously head-strong men had a wild argument over it – the result being that Ferruccio started his own car company to show Enzo how it should be done.

The two companies remain each other’s greatest rivals to this day.

While Lamborghini’s name became forever associated with luxury sports cars, he continued to build tractors into the 1970s. Read about Lambourgini and his tractors at Silodrome. -via Fark

Get the details of this particular model at the auction listing. Bidding will close on January 10.