Mike Butera is in an L.A. charter school classroom, showing teenage music students a small, spherical synth he’s has been working on quietly for the last two years.

Until now, Butera has wanted to fly under the radar with this new product. Fans of his Artiphon Instrument 1—Time magazine and T-Pain among them—are zealous. And this latest release packs even more complicated tech—including spacecraft-inspired hardware—into what’s set to be a more streamlined, simplified product. Butera wanted to be sure he’d gotten it right.

The students proved Orba, live on Kickstarter now, is simple, streamlined, easy to use—and they even demonstrated how it opens new, more creative ways of thinking about music-making.

“None of these kids were talking in genres,” Butera recalls. “They are the first generation to grow up knowing they could make any sound on a laptop or phone, so they don’t worry about whether they know how to play an instrument or not, and they don’t think of music in terms of the outdated guardrails of mass-market genres.” Instead of reaching for EDM presets, they liked the Orba’s Tibetan singing bowl and harp sounds, and mixed them with drums for some surprising and undeniably meditative moods. They embodied Butera’s philosophy that anyone can make music, that the process of making it is emotionally enriching, and that more makers will only broaden creative culture, not water it down.

A sociology professor becomes an inventor

Butera may have also felt at home in that classroom because he was once a full-time professor. He has a background in sound studies and the cultural theory of technology, an interest that led him to start designing the Artiphon Instrument 1.

“The realization I had almost 10 years ago is that music-making had not been disrupted enough for most people to think they could do it,” he says. “It was still something that required people to commit to taking lessons, commit to an instrument. That’s the same way people used to think about photography, cooking, even exercise. Nike didn’t invent running, but they made normal people say, ‘I’m going to go out for a run this morning.'”

Butera wanted to do that for music. And the timing seemed right. GarageBand was becoming available on iPhones and iPads, and he realized that “the way to get music apps into people’s daily lives was to make them immediate and fun and translatable into what we consider ‘real’ musical gestures and behaviors.” The software needed some more engaging hardware.

He spent the next four years prototyping what would become Artiphon’s Instrument 1, a product that looks like an abbreviated electric guitar but which users can also play as a violin, cello, keyboard, or drum pad. It suggested all kinds of musical traditions as it sloshed them into one very new, radically more accessible approach to making music. 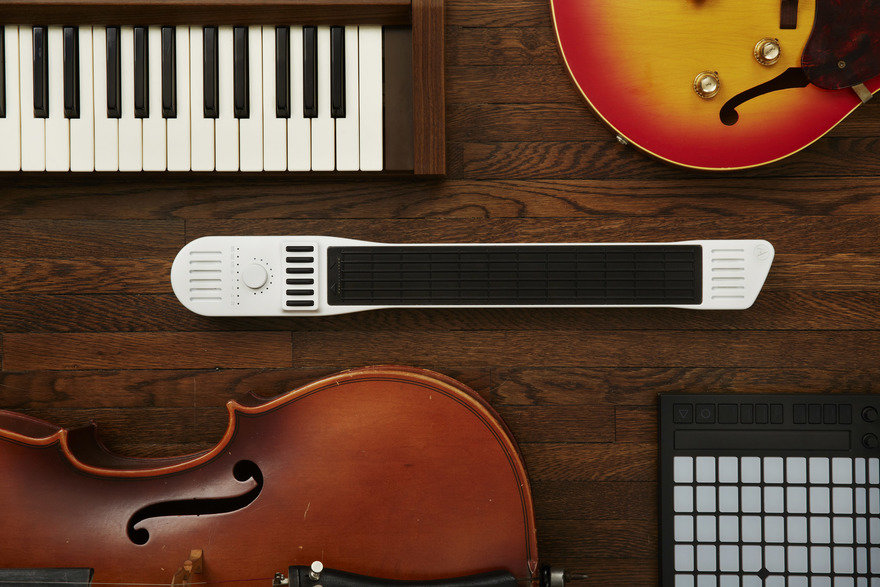 “The fundamental goal was democratizing and treating musical instruments like consumer electronics: mass-producing them, making them affordable, and making people look at them and say, ‘I think I could play that,'” Butera says. “I want to make beginners feel like pros and pros feel like beginners, for artists to have a new sense of wonder and beginners to immediately feel like they’re making great music.”

Instrument 1 was a breakthrough, but the ambition was even bigger

The Instrument 1 achieved Butera’s goals in some respects—it was affordable and accessible, relative to most instruments. But at $399, and with so many references to traditional instruments baked into the design, it was still designed mainly for people who had at least some traditional musical experience.

“The string-like nature of it made it approachable—guitarists represent 60 percent of U.S. musicians,” Butera says. “It could do keys and grid and pads and all these other things, but the physical suggestion of string features became a help for the guitarist and a hindrance for everyone else—and I would even argue [it was] a hindrance for some guitarists who couldn’t see the new things they could do with it.”

Butera went back to the manufacturers he’d worked with on Instrument 1—now with much more product design experience under his belt and an expanded team that included engineers from SpaceX and Blue Origin—and tried tackling the challenge from a new direction, asking how they might build everyday gestures into a more affordable, more plug-and-play experience.

“We just kept thinking about what you could hold in your hand—not trying to translate old instruments, but thinking about directly making music. And as we thought about who this is really for, we talked about two things everyone is doing: They’re on their phones all the time, and they’re playing games. So we started to look at the ergonomics of those activities, and it became more and more obvious that we didn’t need traditional gestures like, for example, strumming. That was based on the physics of strings; now, with fully digital instruments, we’re free to explore new ways to play.”

Their design 180 landed them at 360: a graspable half-sphere that notably diverged from the design of most historical instruments. “Small spheres are underrepresented in musical ergonomics because of the physics of how sound is acoustically produced. You used to need a long string to make resonance, or a large drum or resonant tube,” Butera explains. “But small spheres feel really good to hold: a stress ball, baseball, teacup, or an orange.” 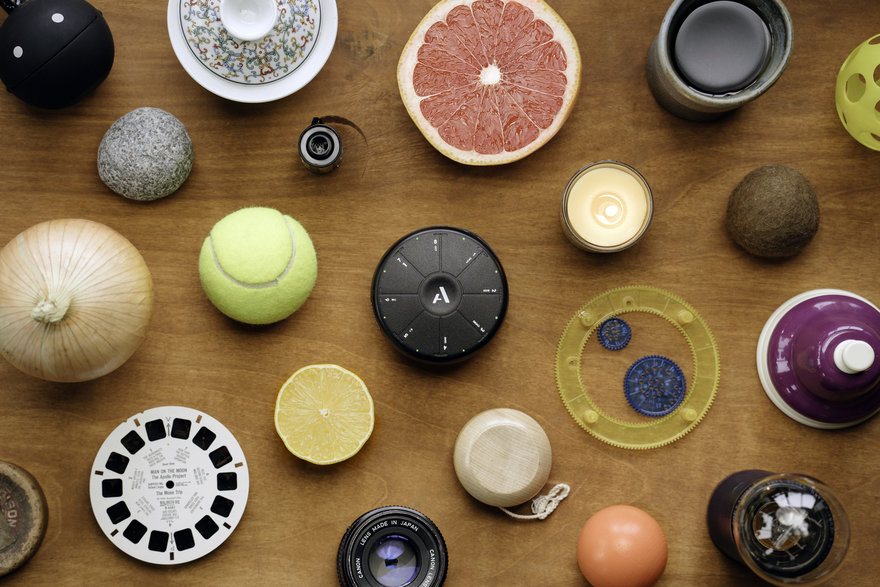 The Orba is meant to evoke easy-to-grab objects like a tennis ball or an orange.

The handheld device makes melodies through taps and shakes, and players can preload patterns so it’s easier to sound good riffing. “The idea is that you don’t need to have a visionary musical intention all the time. Musicians know it’s not like that; it’s messing around and seeing what happens. We’re starting to unlock that for people who could never imagine themselves making sound before,” Butera says.

The synthesizer, looper, and MIDI controller has a built-in speaker, USB connection, LED lights, and Bluetooth—a technical feat made possible by the team’s aerospace engineers. “On satellites and rocket ships you don’t really get second chances,” Butera says of the projects his engineers are used to working on. “Space and music tech have a big similarity: When you intend to do something, it has to work right every time.” The meticulous engineering on the Orba builds the kind of trust in the instrument that helps users feel emboldened to take some creative risks.

“This isn’t about dumbing anything down,” says Butera. “It’s about designing technologies for the normal user, and showing [them] that not everything in music has to be so studio-centric. Just like all our other electronics, you’re going to get this in 10 seconds.”

Making these skills accessible opens up new types of expression. “Music is a very vulnerable thing,” says Butera, “and yet it’s a vehicle for people to express themselves in a way other people can understand and praise them for. It’s not complaining to write a sad song; it’s a work of art.

“I think the more tools we can give people to show their moods, their emotions, and their preferences, the more it turns the tables and invites people to be more than just consumers, to participate in the music you love. There are psychological benefits people get from creating even the simplest of sounds.”

Rating The Sociologist and Space Engineers Behind Orba, Artiphon's New Instrument for Everyone is 5.0 / 5 Votes: 2
Please wait...
Loading...
Related articles