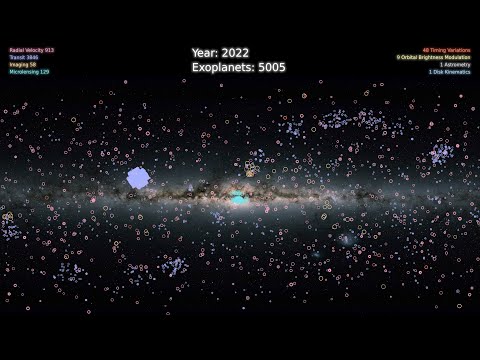 There was a time when all we knew were the nine planets (now eight) that revolve around our sun. Then we developed amazing space telescopes that can capture images outside our solar system. On March 21, NASA confirmed the 5,000th exoplanet. To celebrate this milestone, NASA put together a data visualization, a timeline on a 360° map, showing when each exoplanet was discovered.

As each exoplanet is discovered, a circle appears at its position in the sky. The size of the circle indicates the relative size of the planet’s orbit and the color indicates which planet detection method was used to discover it. The music is created by playing a note for each newly discovered world. The pitch of the note indicates the relative orbital period of the planet. Planets that take a longer time to orbit their stars are heard as lower notes, while planets that orbit more quickly are heard as higher notes.

The big blue blob that appears on the left in 2013-14 represents data picked up from the Kepler space telescope. That data confirmed 1,284 exoplanets and hinted at thousands more possible exoplanets. -via Metafilter