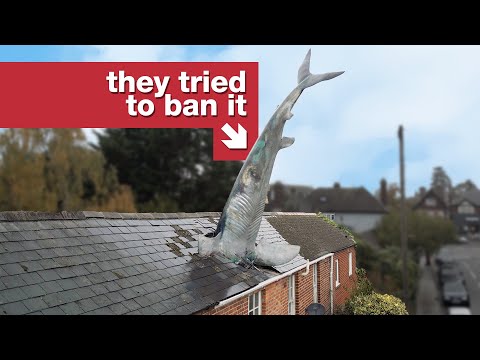 The shark that crashed into a roof in Headington, UK, might have been one of the first viral images you ever saw on the internet. The Headington Shark was erected on August 9, 1986, by homeowner Bill Heine and sculptor John Buckley. The neighbors were at first shocked, then amused, and then came around to very much liking the shark. The local planning commission was not notified, and no building permit was issued. They were not amused. They didn’t want to forgive the violation of its authority, and didn’t want to encourage other people to do that sort of thing. Heine battled bureaucrats for years to get permission to leave the shark up. Over time, it became clear that no one else was going to cut through their roofs to make a statement, so the shark was eventually reconsidered as a unique piece of art. Tom Scott gets the whole story from Bill Heine’s son and current owner of the house Magnus Hanson-Heine.