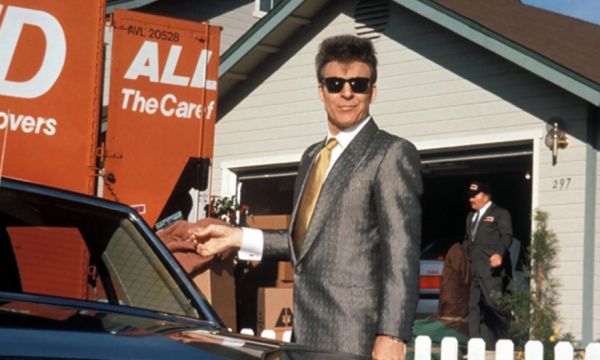 Last month, in the comments under the Honest Trailer for Goodfellas, I found that I am not the only fan of My Blue Heaven around here. There are three of us! If you haven’t seen the film, learning how it came about will only make you want to see it more. My Blue Heaven is about a mafia figure named Vincent Antonelli (Martin) who goes into the witness protection program. In his new town, he runs into other mob informants who are chafing under the blandness of suburban life. So they dip back into a life of crime on their own.

My Blue Heaven could be called a sequel to Goodfellas, except that it hit theaters a month before the Scorsese film, the lead character is not named Henry Hill, and it’s a comedy. But it is a sequel, as Henry Hill’s story ended in Goodfellas at the point it begins in My Blue Heaven. Steve Martin wanted to play the part of the FBI agent (ultimately played by Rick Moranis), but author Nora Ephron wanted him to play the local DA (Joan Cusack). We can’t imagine Martin playing any other role than Vinnie Antonelli, in which he out-caricatures any stereotype in Goodfellas and made the movie his own. Read how accurate My Blue Heaven was to Henry Hill’s life and how it ended up as a comedy at Mental Floss.