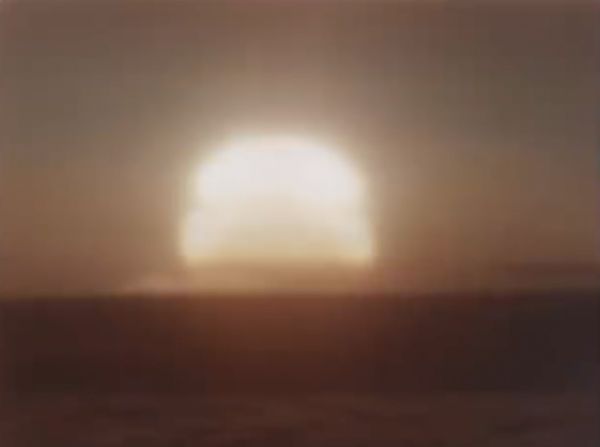 On October 30, 1961, the Soviet Union tested the world’s largest nuclear bomb. Tsar Bomba, as it came to be known, was deployed over an Arctic island and produced a fireball six miles wide. The explosion yielded the power of 50 megatons of TNT, although the bomb was capable of 100 megatons. In comparison, the bomb the US dropped on Hiroshima had the explosive power of 15 kilotons of TNT. Tsar Bomba was 40 times as powerful as any nuclear weapon the US ever built to this day. The test of the bomb brought an end to the nuclear test ban treaty between the US and the USSR that had been in effect since 1958.

The US denounced the test, but publicly downplayed it in the press. The Soviets were obviously ahead the nuclear arms race, but that was because the US at the time deliberately avoided building larger nuclear bombs. The Eisenhower administration didn’t think it was ethical, as if small nuclear bombs were. But once the Soviets had tested its Tsar Bomba, scientists were asked to design larger nuclear weapons. And US nuclear testing came back in full swing. Read the story of Tsar Bomba and the American response at Bulletin of the Atomic Scientists. The article includes footage from a Soviet documentary about the bomb.   -via Digg