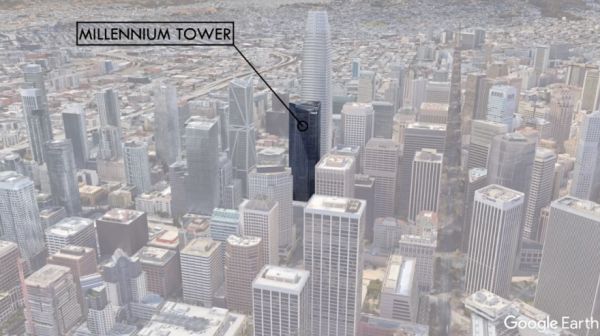 The 58-story Millennium Tower in San Francisco is the tallest residential building in the city. Whatever you may think of the wisdom of living in a skyscraper in an earthquake-prone city, residents began moving in in 2009, despite the fact that there were already signs of trouble with the building. Two terms come to mind when reading about the Millennium Tower: One is the “sunk cost fallacy,” but that’s a little too on the nose, and “throwing good money after bad,” which means the same thing without the word “sunk.”

Such a large and heavy building built close to the sea needs an extremely stable foundation. The Millennium Tower was built on a ten-foot-thick slab over 950 concrete piles installed 80 feet deep. Engineers thought that was enough, and predicted the building would settle four to six inches over its lifetime. But the building settled 16 inches by 2016, and not evenly. The top of the skyscraper was 12 inches out of plumb! That’s twice what building codes allowed, but the residents were assured the building was safe. Still, there were numerous lawsuits to be settled.

What next? Engineers came up with a plan to fix the Millennium Tower, even though the repairs to the foundation would cost twice the original construction cost. And when they started the repair process, plans went awry again. Read the story of the Millennium Tower from an engineer’s perspective, or watch it in video form, at Practical Engineering. -via Nag on the Lake