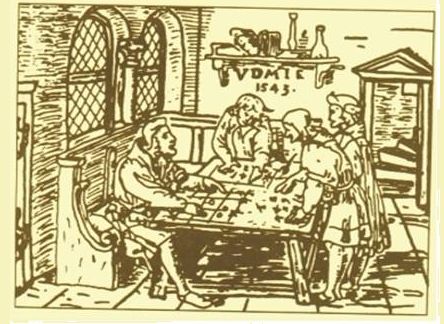 Robert Recorde was a polymath Welshman born in 1510. He became a university professor, then a physician, then a finance man running the mint. He wrote textbooks on astronomy, geometry, theology, and arithmetic. He wrote those textbooks in English, which made his knowledge available for the first time to scholar who didn’t read Latin. But what Recorde did that was the most lasting contribution was that he invented the = sign.

Recorde’s symbol didn’t catch on at first. The language of Latin still held sway during the 16th century. Latin had a word for the concept, “aequalis,” and if more concision was necessary, people could shorten it to “ae” or “oe.” But aiding the popularity of the equals sign was Recorde’s introduction, to English-speakers, of the German symbols “+” and “-“. In combination, these signs allowed people to express, quickly and with a minimum of wasted ink, a mathematical equation in symbols. Instead of writing, “A factore added to a quantitie of thryeye is equalle to a dyffyrynte factore frome whyche is takene awaye a quantitie of foure,” a mathematician could write: “x + 3 = y – 4”.

That opened the door for math to have its own language, understandable by people all over the world. Read about the remarkable Recorde and his legacy at Ars Technica. -via Digg