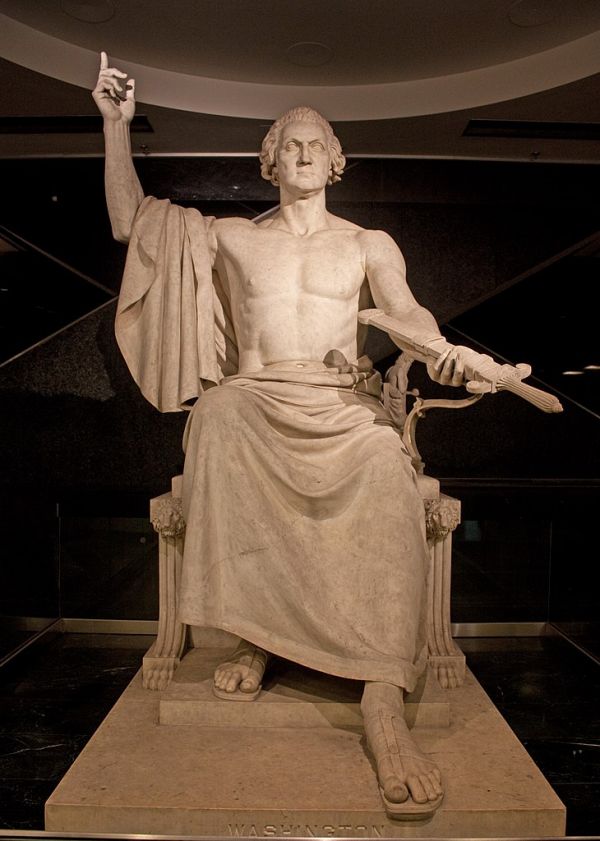 The first real monument to George Washington was a statue commissioned to stand in the Capitol Rotunda. The artist selected was one of America’s first professional sculptors, Horatio Greenough. Greenough was American, but studied classical sculpture in Europe, so American movers and shakers expected some classical influence. What they didn’t expect was a semi-nude Father of our Country. It was certainly not the image most people had of the president.

It didn’t help that Washington himself was seen as a prude, with Hone claiming Washington would never have “expose[d] himself” in such a way publicly and Rep. Henry Wise said that no human had ever looked upon the general’s skin (sorry, Martha!) and so to keep the head but throw the rest in the Potomac. Architect Charles Bullfinch summed it up, pointing out it would “only give the idea of entering or leaving a bath.” (The best explanation I read for why Greenough’s statue conceptually was just so wrong is this essay by none other than Garry Wills.) As Savage notes in Monument Wars, it went “down in the annals of American art history as the most reviled public statue ever erected.”

The 12-ton statue only stood in the rotunda for a few months, then was moved outside. It eventually ended up in the Smithsonian American History Museum. Read the story of how the nude Washington came about at The DailyBeast.