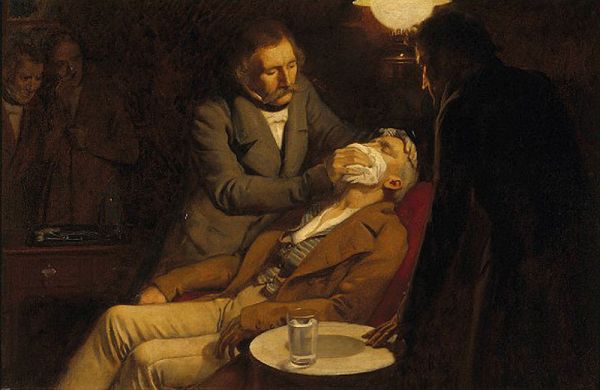 The use of anesthesia to block the pain of surgery was a game changer for medicine. When dentist William T. G. Morton used ether to block the pain of tooth extraction in September of 1846. He then administered ether to a patient during neck surgery in the theater of Massachusetts General Hospital in October. The painless surgery caused a sensation, and Morton was quick to capitalize on it.

Morton toiled unsuccessfully for years to get the U.S. Congress to recognize his “discovery” and grant him a monetary award. He tried to disguise his ether with odorants and coloring agent, even naming it “Letheon,” after the river in Greek mythology believed to induce forgetfulness, in his unsuccessful effort to patent it. “Letheon” was quickly identified as ether, which was in the public domain.

What the world didn’t know at the time was that Dr. Crawford Long of Jefferson, Georgia, used ether in surgery beginning in 1842. He had used the anesthetic in seven surgeries by the time of Morton’s demonstration. So why did Morton get the credit? One reason is the difference between Massachusetts General Hospital and a private clinic in a small town in Georgia. But it was mainly because Long didn’t publish his findings until 1849, for several very good reasons. The story of the first surgical use of ether pits publicity against scientific rigor, which you can read about at The Conversation. -via Damn Interesting

Rating The Surprising Story of the First Use of Ether in Surgery is 5.0 / 5 Votes: 4
Please wait...
Loading...
Related articles