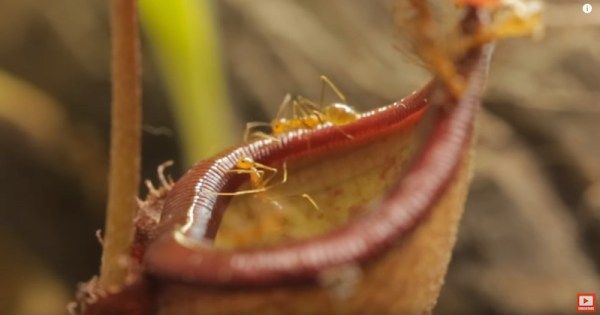 Carnivorous plants are seen as the ultimate bug eating machines, but their entice, entrap and devour technique only works on some bugs, and those who are immune to their tricks feed on them instead.

But even weirder than the eaters of carnivorous plants are those industrious insects who develop a symbiotic relationship with the killer plant- like the Camponotus schmitzi ants that live on the Bornean pitcher plant:

An insect-eating pitcher plant teams up with ants to prevent mosquito larvae from stealing its nutrients, according to research published May 22 in the open access journal PLOS ONE by Mathias Scharmann and colleagues from the University of Cambridge and the University Brunei Darussalam.

The unusual relationship between insect-eating pitcher plants and ants that live exclusively on them has long puzzled scientists. The Camponotus schmitzi ants live only on one species of Bornean pitcher plants (Nepenthes bicalcarata), where they walk across slippery pitcher traps, swim and dive in the plant’s digestive fluids and consume nectar and prey that fall into the trap. Though the benefits to the ants are obvious, it has been harder to tell what exactly the plants gain. However, plants that harbor the insects grow larger than those that do not, suggesting a mutualistic relationship exists between the two.

Here’s a related video from AntsCanada showing what happened when he introduced pitcher plants to a terrarium teeming with yellow ants. He thought it would help thin the population, but the colony had other ideas… 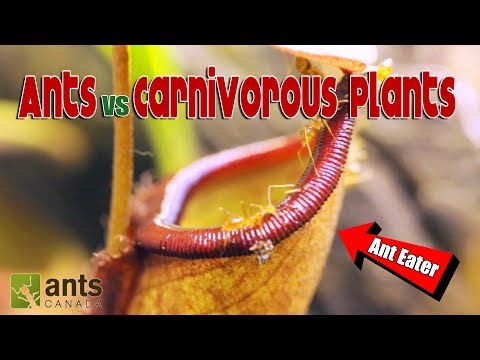