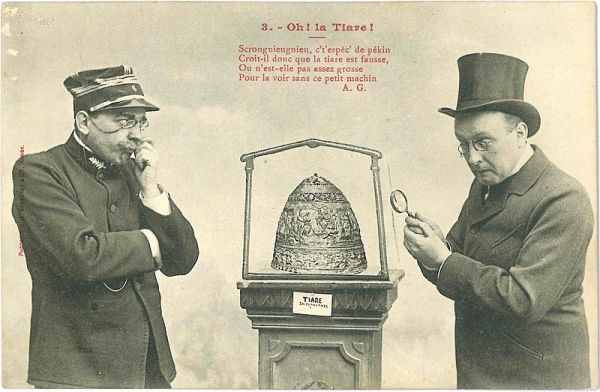 The 19th century was a unique time for archaeology, with wondrous treasures being unearthed all over the world and sent back to the discoverer’s home country (or sponsoring country) to be kept in a museum. Museums became very competitive in acquiring ancient artifacts, which sometimes led them to be too trusting as to an artifact’s provenance.

For the better part of a decade, the widely celebrated and esteemed Louvre Museum of Paris proudly displayed a supposedly ancient tiara made of solid gold. Experts at the Louvre identified it as belonging to the Scythian king Saitapharnes who ruled sometime in the 3rd century BCE. An inscription on the tiara mentioning that it was a gift from Olbia, a Greek colony on the Black Sea coast, to King Saitaphernes left no doubt about the item’s authenticity and great age. But later it became clear that the tiara’s new owner had been a little haste in acquiring the item. The exhibit is now locked away in storage—an embarrassment, for the tiara was proved to be a hoax perpetuated by two Russian art dealers.

Embarrassing for the museum curator, but the incident turned out to be quite lucrative for the goldsmith who made the tiara. Read the story of the Scythian tiara hoax at Amusing Planet.