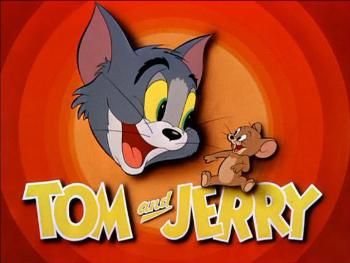 In 1939, producer Rudolf Ising and his MGM animation unit were in trouble. Their last animated series, Captain and the Kids, had been a huge flop, in both financial and popular terms.

Ising, on an inspiration, decided to team up two members of his unit and try to strike gold with a new animated series idea. He decided to combine the talents of Wiliam Hanna, a director, and Joseph Barbera, a story man and character designer.

It was Hanna who had the (hardly original) idea of combining a cat and a mouse in a cartoon. Hanna recalled: “We knew we needed two new characters. We thought we needed conflict and chase and action, and a cat and mouse seemed like a great, basic thought.” Barbera added that with a cat and mouse “Half the story was written before you even put pencil to paper.”

The new cartoon was called Puss Gets the Boot. The term “Tom and Jerry” dated back to 19th-century England, and referred to children behaving mischievously. Although this would almost fit a fairly apt capsule description of the soon-to-be world famous toon pair, the usage of the two names was merely a coincidence. (As a side note, a “Tom and Jerry” was also the name of a popular Christmastime drink.)

Puss Gets the Boot premiered on February 10, 1940. The toon was released without any fanfare, completely unceremoniously. The fact is, the suits at MGM had already screened it for themselves and were unimpressed, but since they had nothing else in the works, they decided to release it.

Although the general concept of the series (cat menacing and chasing mouse, with mouse turning the tables and coming out the victor by toon’s end) was already set, the two main characters had not yet been given their iconic names. In this toon, Tom is called “Jasper” and Jerry goes unnamed (although in the writer’s notes, he is referred to as “Jinx”). Ironically, a much later Hanna-Barbera toon television series would feature a character named “Jinx,” who was a cat. Jinx was the nemesis of two mice named Pixie and Dixie. 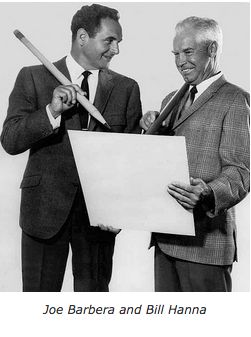 But the clincher was a letter from a leading Texas distributor asking, “When are we going to see more of those adorable cat and mouse cartoons?” This distributor was too important to ignore, so Hanna and Barbera were told to develop the series.

It was in the follow-up toon, The Midnight Snack (1941), that “Tom and Jerry” were officially dubbed as such. Interestingly, a contest was run to give the characters their monikers. An animator named John Carr won $50 for coming up with  the names “Tom” and “Jerry.”

The pattern behind the scenes was set too, with Barbera creating the story and Hanna supervIsing production. The Tom and Jerry cartoons, like all previous cat and mouse animated encounters, featured a predatory cat preying (or trying to prey) on a physically smaller and weaker mouse. This, of course, made Jerry the sympathetic figure, the audience’s rooting interest.

Interestingly, although Tom did go after Jerry in pretty much every toon, he seldom desired (as one would logically assume) to actually consume him. Tom’s intention usually appeared to be more of a sadistic desire, to hurt, embarrass or humiliate Jerry, or to use him as a gift to impress or woo the female felines he was enamored of.

The violence featured in the Tom and Jerry toons was often criticized as being excessive. (The Simpsons‘ overly violent characters Itchy and Scratchy are a homage to Tom and Jerry.) And they are amongst the most violent toons in animation history, but like the Three Stooges’ slapstick shorts, they never resulted in any blood or gore and no permanent injuries were ever sustained. 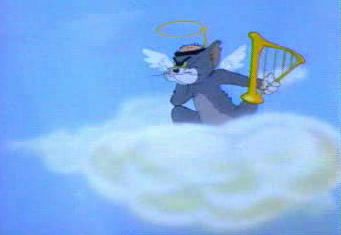 Tom usually took the brunt of the violence, in fact, he actually died in five Tom and Jerry toons. In 1944’s Mouse Trouble, Tom is seen going off to heaven, harp in hand, and in 1952’s The Two Mousketeers, he is guillotined off-camera. Although Tom was usually the aggressor, in two toons, Mouse Trouble and The Missing Mouse (1953) Jerry actually beats him up.

In the series, Tom has a healthy appetite not only for menacing Jerry, but for trying to make time with the lady cats. His two main female objects of desire are Toots, introduced in Puss ‘n Toots (1942) and Toodles Galore, who made her first appearance in Springtime for Thomas (1946). Toodles never speaks, but Toots does address her admirer as “Tommy.”

Toots, Toodles, and the other less famous objects of Tom’s male desire, were usually featured so Tom could try to impress them by displaying his macho power over Jerry. This, of course, always resulted in the opposite, and Tom, as in his pursuit of Jerry, always failed in charming his desired females

Tom and Jerry seldom spoke themselves. However, there were frequent laughs and high-pitched, suffering squeals of pain -coming from Tom. When the characters did speak, Wiliam Hanna would supply his own voice for Tom, along with Clarence Nash (the voice of Donald Duck), Red Coffee, Harry E. Lang and Billy Bletcher. Jerry’s voice was often supplied by Sara Berner. All voices in Tom and Jerry cartoons were uncredited

The “no speak” rule usually applied, but was not written in stone. Tom sings “Is You Is or Is you ain’t My Baby” in Solid Serenade (1946). In The Zoot Cat (1944), Tom tries to woo Toots by using a Charles Boyer, heavy on the thick French accent, voice. In 1946’s Trap Happy, Tom spells out the word “cat” and points to himself. Sometimes, after one of his usual disasters, Tom will hauntingly look at the camera and creepily say “Don’t you believe it.” This was a take-off of the then-popular radio series of the same name.

Jerry did not verbalize as often as Tom, but in 1956’s Blue Cat Blues, Paul Frees, as Jerry, is actually the toon’s narrator. The Zoot Cat is also highly unusual, in that both Tom and Jerry speak. 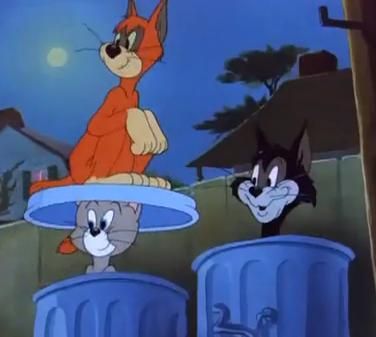 There were other, peripheral characters who recurred in the series. Butch, an alley cat, was a sometimes friend/sometimes rival of Tom’s. The two would sometimes be pitted against each other in pursuit of a female cat. But other times, Tom and Butch were pals and ran around with the same gang of cats- Lightning, Topsy and Meathead.

Another adversary of Tom’s is a giant (and not very bright) bulldog named Spike, who spoke in a Jimmy Durante-like voice. Although in some of the toons they are allies, Spike usually gives Tom something else to worry about in his pursuit of Jerry.

Perhaps the most unfortunate character in the Tom and Jerry series is “Mammy Two Shoes.” Mammy is a stereotypical African-American house maid who will talk to Tom, either admonishing him or being cordial. Mammy, like all other Tom and Jerry human adults, is seldom seen, except from the waist down. However, in Saturday Evening Puss (1950), her face is briefly shown. 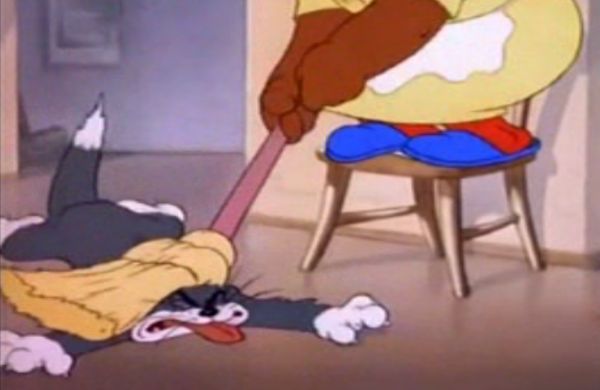 Mammy has been either deleted out, re-dubbed or re-animated in many of the television versions of Tom and Jerry. In the DVD Tom and Jerry series, Whoopi Goldberg appears and tells the viewer about Mammy Two Shoes, reminding them that yes, the character was stereotypical, but it was also, at the time, important to have any appearances at all by African-Americans in mainstream films and cartoons.

In 1958, Tot Watchers, the last of the 114 original MGM Tom and Jerry cartoons was released. Because of financial constraints, the popular series ended its incredible run.

Later versions of Tom and Jerry were produced, in both film and on television. But like the “39 classic” episodes of The Honeymooners, all other versions sadly pale in comparison. 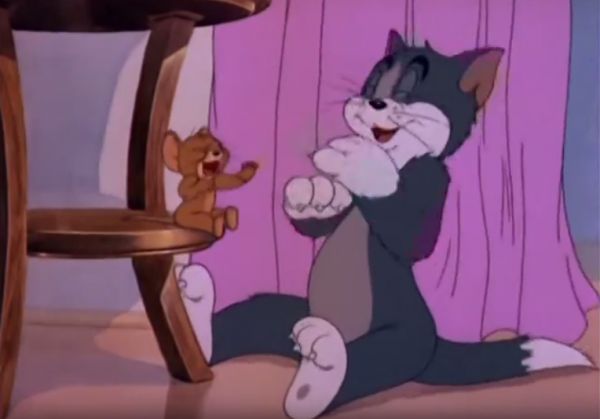 During the Tom and Jerry initial run, Wiliam Hanna and Joseph Barbera were completely unknown to the mainstream public. But using Tom and Jerry as a career springboard, they were able to launch a legacy of beloved animated tv series and characters, including The Flintstones, The Jetsons, Scooby-doo, Yogi Bear, Huckleberry Hound, and many others. These toons, along with their original brainchild Tom and Jerry, continue to delight children (and adults) the world over.