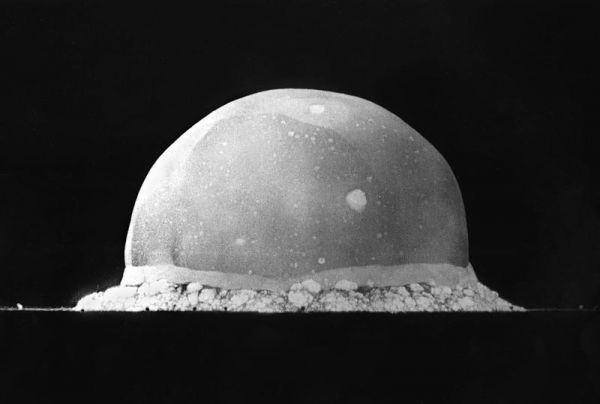 This is not about Oak Ridge, Tennessee, which we’ve covered a few times before. Los Alamos, New Mexico, was where Robert Oppenheimer and his team of physicists worked at the Los Alamos Scientific Laboratory to design the world’s first nuclear bomb. Before the laboratory, there was little to be found in the area, but when employees moved in, it became a community. After the war, the development of nuclear weapons continued at Los Alamos, but the government didn’t want that to be widely known. A 1954 public relations campaign made it seem like just another town.

It had multiple barber shops, movie theatres, and jewelers, a photography store, pastry shop and even a florist. There was a police force and fire department, albeit one directly subsidized by the federal Atomic Energy Council that also had to be trained in special firefighting techniques involving radioactive materials. There was a daily flight from Los Alamos to Albuquerque, a library stocked with over 18,000 titles, and living space aplenty, with the smallest one-bedroom apartments going for $22 a month and rents for the largest units capped at $135. Residents of Los Alamos could even listen to the radio, a luxury that wasn’t afforded them during wartime. Their local station, KRSN was presided over by a certain Robert Porton, whose “large record collection is the envy of many a disc jockey.”

Sure, most of 12,000 citizens were working on developing weapons of mass destruction or the family members of someone who was, but other than that, Los Alamos was a paragon of idyllic 50s American life.

Read about how Los Alamos went from a brand new wartime facility to a “normal” town at Motherboard.

Rating The Totally Normal Town Where Everyone Worked on Weapons of Mass Destruction is 5.0 / 5 Votes: 3
Please wait...
Loading...
Related articles