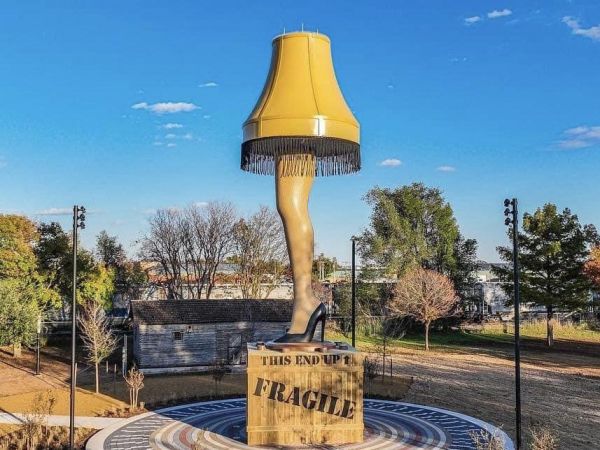 The town of Chickasha, Oklahoma, has a new monument and tourist draw. It’s a giant fiberglass version of the leg lamp featured in the 1983 movie A Christmas Story. The lamp is either 40 or 50 feet tall (sources vary). The leg lamp was first erected as an inflatable in November of 2020, but had so many wind related disaster that it was eventually retired, and was replaced by a permanent fiberglass sculpture earlier this month.

The leg lamp was a dream of Chickasha resident Tim Elliot, who wanted a unique symbol to draw tourist to his hometown. No one else was interested, though, until they learned about the lamp in the office of visual arts professor Noland James. James died in 2020, and his obituary revealed that he was convinced that his homemade lamp inspired the one in the movie. You can see James’ lamp in this article. While those involved with A Christmas Story deny any connection with James, the legend was enough to galvanize the town into making the giant leg lamp happen. The Chickasha Leg Lamp has its own Facebook page. -via reddit