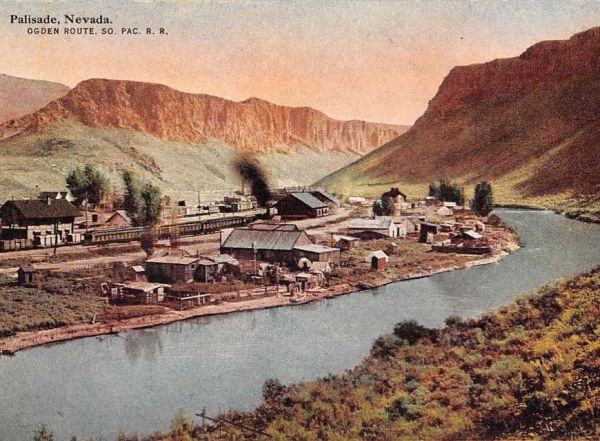 We’ve been to Wild West amusement parks where a gunfight in the street was scheduled for every hour, on the hour. When Palisade, Nevada, did it, those gunfights were scheduled according to when passengers arrived on the railroad train -and those disembarking had no idea it was all staged. See, when the transcontinental railroad opened for business, travelers complained that the Wild West wasn’t nearly as wild as it had been depicted in dime novels. In 1870, the tiny new railroad town of Palisade decided to do something about that, and maybe drum up some tourist business.

Their plan worked magnificently. Gunfights broke out in the street every time a train stopped. The town developed a reputation as a “must-see” among tourists, and journalists were eager to describe the carnage, albeit without too many facts about the perpetrators or victims. The town also staged bank robberies and Indian raids, which kept the people coming to town for a few years. Despite all the “killings,” the population of Palisade peaked at about 300 people during this period, almost all involved in the performances. Read about the Palisade Wild West show at Messy Nessy Chic.

The First Photograph in History

It Doesn't Get Any Cuter than This: Guinea Pig Reviews Halloween Costumes & Other Neat Posts

Explaining Why an Orchestra Is What It Is

A Well-Intentioned Poussin Show Almost Gets it Right

An Anarchist Illustrator Looks to Radical Histories to Fight Fascism

Creating Home From Scraps of Place