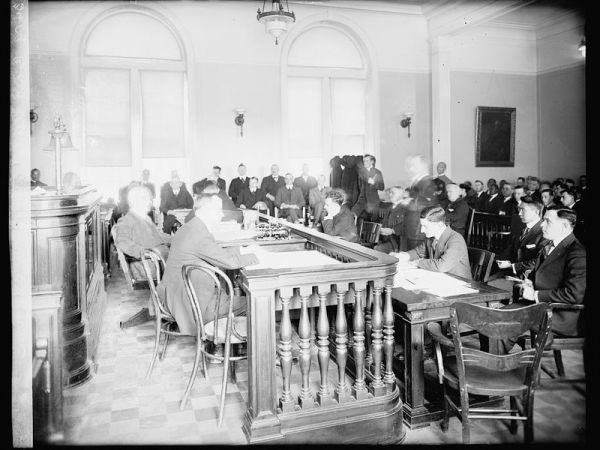 We are familiar with the “right to remain silent” from hearing Miranda warnings on TV shows, but the concept goes back much further than the 1966 case of Miranda v. Arizona. Police tactics for extracting confessions landed in the Supreme Court after a 1919 murder case. Three Chinese diplomats were murdered, and Ziang Sung Wan confessed after nine days of brutal police interrogation. He recanted his confession in court, but it was deemed admissible despite his treatment because of an 1897 ruling that the only reason to exclude a confession would be because of “promises or threats” from the police. The interrogators had not used either, but there were plenty of other ways of making Wan talk.

In the quarter-century since the 1897 ruling, the country had been embroiled in a robust national debate about the ethics and efficacy of what had come to be called the “third degree.” Creative detectives had come up with many methods of extracting confessions from unwilling suspects, some of which amounted to nothing short of torture. As techniques like quartering suspects in pitch-dark cells, turning up the heat to “sweat” confessions out of them, and even blowing red pepper or releasing red ants into their cells were exposed, the public reaction was strongly negative. The newspapers began decrying the practices as brutal and un-American.

At the same time, there was a fierce debate going on in the judiciary as to what kinds of interrogations and police conduct actually were prohibited under the law. All of this, on top of the staggering evidence that Wan’s confession had been coerced, provided ample justification for the Supreme Court to bring order to the chaos surrounding confessions.

Read about the court case and its appeals at Smithsonian.

Rating The Triple Homicide in D.C. That Laid the Groundwork for Americans’ Right to Remain Silent is 5.0 / 5 Votes: 1
Please wait...
Loading...
Related articles