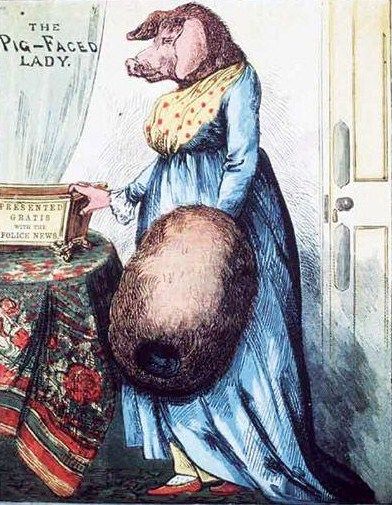 There is a legend in the 17th century that tells the story of a woman whose face turned to that of a pig’s, thanks to the power of witchcraft. According to the story, after the wedding of a man and the pig-faced woman, a witch offered a choice to the man: either the woman will appear beautiful to him and pig-faced to others, or she will appear beautiful to others, but pig-faced to him. When the man left the choice to the woman, the spell was broken, and her pig-faced appearance ended with it.

As time went on, the stories evolved, and then evolved to rumors. People reported sightings of the pig-faced lady. And then people turned it into reality at the freak shows by stuffing drunk bears into dresses.

People now wanted to see a pig-faced woman, rather than be merely told there’s one.

“The pig-faced lady is not infrequently exhibited in travelling-caravans, by showmen at fairs, country-wakes, races and places of general resort,” Robert Chambers wrote in 1832.

Learn more about this over at IFL Science.

Unique Folk Art Recreates the World Before the Armenian Genocide

Off the Record Confronts Our Understanding of Objectivity

Honoring the Stories of Undocumented Indigenous Women in Los Angeles

Why We Need a Feminist Manifesta of the Blockchain