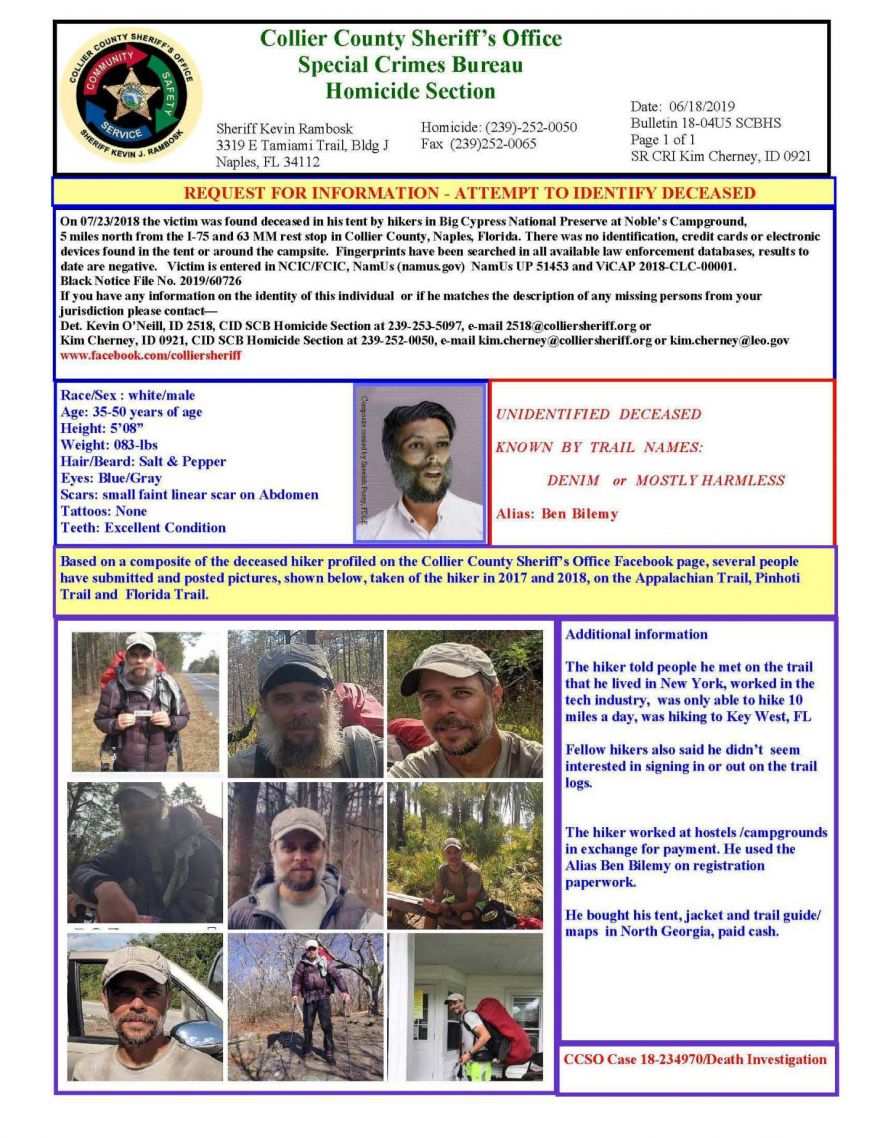 Multiple hikers and travelers have encountered a nameless hiker, who only introduced himself as a ‘mostly harmless’ hiker before he was found dead in a tent. Investigators tried to identify the unknown man, but his fingerprints didn’t show up in any law enforcement database, and his DNA did not match any entry in the national DNA databases. His cause of death was ‘undetermined’, just like how no one knows his identity. The mystery behind his death and his identity has alluded investigators for years, and even the Internet tried their best in trying to solve the mystery of the hiker:

The investigators were stumped. To find out what had happened, they needed to learn who he was. So the Florida Department of Law Enforcement drew up an image of Mostly Harmless, and the Collier County investigators shared it with the public. In the sketch, his mouth is open wide, and his eyes too. He has a gray and black beard, with a bare patch of skin right below the mouth. His teeth, as noted in the autopsy, are perfect, suggesting he had good dental care as a child. He looks startled but also oddly pleased, as if he’s just seen a clown jump out from behind a curtain. The image started to circulate online along with other pictures from his campsite, including his tent and his hiking poles.

Soon there were dozens of people jumping in. They had seen the hiker too. They had journeyed with him for a few hours or a few days. They had sat at a campfire with him. There was a GoPro video in which he appeared. People remembered him talking about a sister in either Sarasota or Saratoga. They thought he had said he was from near Baton Rouge. One person remembered that he ate a lot of sticky buns; another said that he loved ketchup. But no one knew his name. When the body of Chris McCandless was found in the wilds of Alaska in the summer of 1992 without any identification, it took authorities only two weeks to figure out his identity. A friend in South Dakota, who’d known McCandless as “Alex,” heard a discussion of the story on AM radio and called the authorities. Clues followed quickly, and McCandless’ family was soon found.

The story pulled people in. Everyone, at some point, has wanted to put their phone in a garbage can and head off with a fake name and a wad of cash. Here was someone who had done it and who seemed to have so much going for him: He was kind, charming, educated. He knew how to code. And yet he had died alone in a yellow tent. Maybe he had been chased by demons and had sought an ending like this. Or maybe he had just been outmatched by the wilderness and the Florida heat.

The Best Books of 2020, According to the New York Public Library

Turn Pictures Into Paintings With These Apps!

Hunting Season at the Nursing Home

Hey Aliens, Did You Drop This?

This Treehouse Is Attached To A Pine Tree