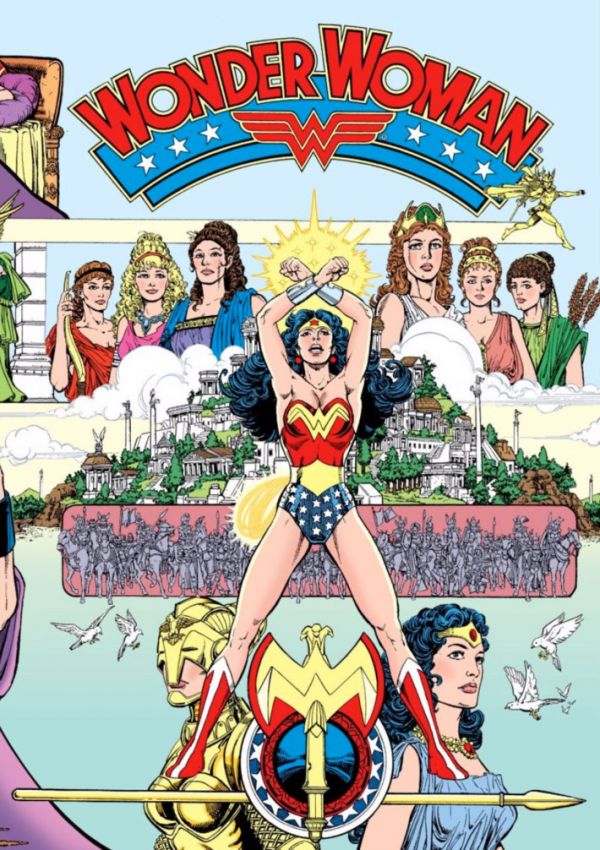 If you want to understand Wonder Woman, you need to understand her comic book history. We’ve posted about her beginning as written by William Moulton Marston in 1941. But in the forty years afterward, Wonder Woman stories varied so much that her world, like many DC superhero stories, became a convoluted mess.

No character suffered from the ailments of continuity more than Wonder Woman. First introduced in 1940s tales that formed a kind of pop-culture feminist urtext, she had been depicted as a lasso-wielding warrior named Diana from an advanced society of ancient Amazons on a place called Paradise Island. She was a liberated woman before people generally spoke of such things, possessing an array of superpowers ranging from super-strength to ESP, as well as a curious fondness for bondage. She comes to the world of men to fight Nazis alongside a military love interest named Steve Trevor and best friend Etta Candy, a mouth-stuffing, plus-size woman who provided comic relief. It was as wonderful as it was eyebrow-raising.

Those early stories were simple enough, but over time, they were revised and rethought over and over to the point of near insanity. Readers learned that the WWII Diana actually lived on an alternate-reality planet called Earth-2, and that there was another Diana that they’d retroactively been reading about for the past few years. They perused multiple retellings of her origin story that rewrote not only her narrative but the nature of her powers, and that couldn’t be easily reconciled with one another. Then she lost her powers entirely and became a mortal woman who trained under a racist caricature named I Ching. Then she became an Emma Peel–esque super-spy for a while. It was enough to make your tiara spin.

That all changed in 1986, thanks to writer George Pérez. Read the story of how he redefined Wonder Woman in 1986 and made her the superhero we know today. -via Digg