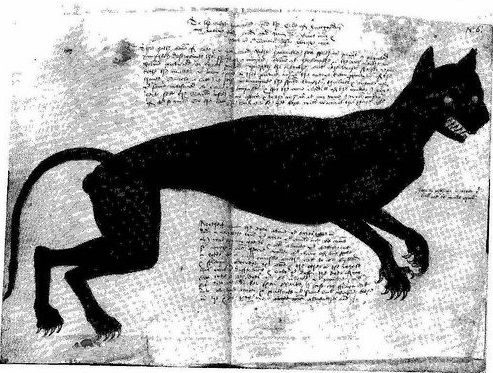 The case of Agnes Bowker illustrates the bizarre lengths that one might go to in order to explain an out-of-wedlock birth in the days when there was no greater shame. In Leicestershire, England, in 1569, Bowker was said to have given birth to a demon shaped like a cat. The tale spread like wildfire and seems to have grown greatly with time. Bowker herself denied none of it.

Word of the anomalous birth made it all the way to Queen Elizabeth’s Privy Council and the Bishop of London, and rather than being written off as a hoax, the birth was actually seriously investigated. Among the first to be questioned on the incident were Bowker’s midwives, who were allegedly present at the birth, and amazingly they seemed to support the woman’s wild claims. One of the midwives, named Elizabeth Harrison, claimed that she had seen the alleged father of the creature, which she described as “the likeness of a bear, sometimes like a dog, sometimes like a man,” and explained that six other midwives had been present for the ominous birth. Another midwife named Margaret Roos claimed that, while she hadn’t actually seen the baby, it had “pricked” her with its claws while still in the womb, and although none of them had seen it actually come out of the body, it was claimed that they had gone to fetch what they needed for the birth and come back to the room to see the monstrosity on the floor at Bowker’s feet. Making it all the more bizarre is that Harrison also testified that Bowker had told her of meeting a woman in the countryside who had cryptically told her the portent that she would give birth to a beast called the “Mooncalf.”

Those who heard the tale were so impressed by the demon that they didn’t stop to wonder why Bowker would have seven midwives, who were all strangely absent during the actual birth. Then there was the autopsy of the “demon,” which participants concluded was just a dead cat. The story has the marks of a plot hatched by a small circle of friends to protect Bowker’s reputation that grew out of hand, gripped the superstitious population, and became part of the historical record. Read about Agnes Bowker’s demon birth at Mysterious Universe. -via Strange Company