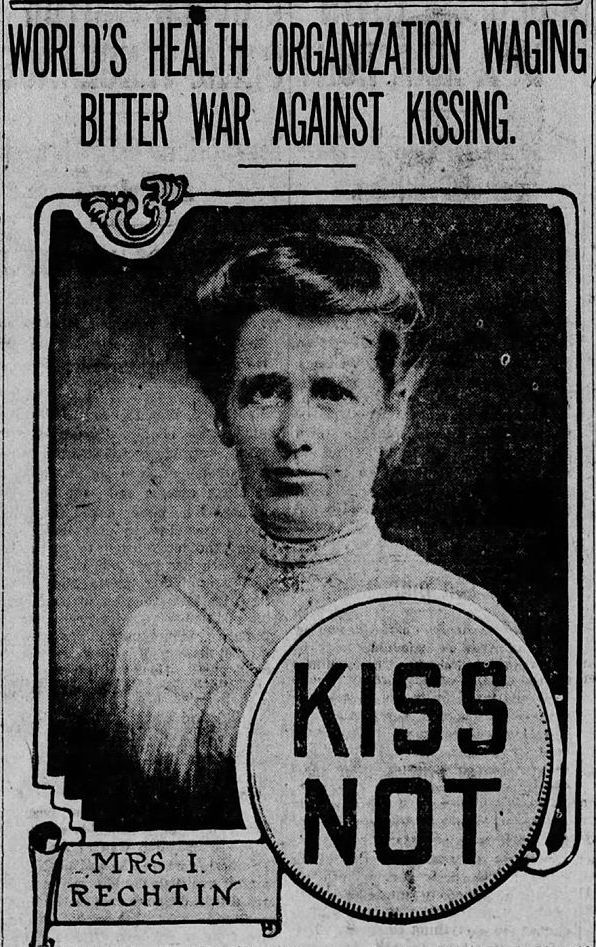 Imogene Rechtin was horrified by the idea of germs. Germ theory was still relatively new when Rechtin decided people were just plain kissing each other too much, and spreading germs to everyone they met. Women often greeted each other with a short kiss on the lips, and some people even kissed both cheeks when they met! At a party in 1910, Rechtin’s revulsion at a reception line in which the hostess kissed all attendees inspired her mission to stop such promiscuous germ sharing. She began a movement, and an organization called the World Health Organization (really) to push for less kissing, even in the privacy of one’s home.

Rechtin’s campaign was ridiculed in the press. It was seen as just another of many public reform campaigns of the time, like women’s suffrage, temperance, or the strange ideas of health gurus like John Harvey Kellogg. The campaign to end kissing only lasted a year and a half. But Rechtin’s story is worth remembering, because she was right. Promiscuous kissing is a surefire way to transfer germs. Beyond that, her efforts highlighted the lack of body autonomy for women. Read about Imogene Rechtin and her campaign against kissing at Smithsonian.