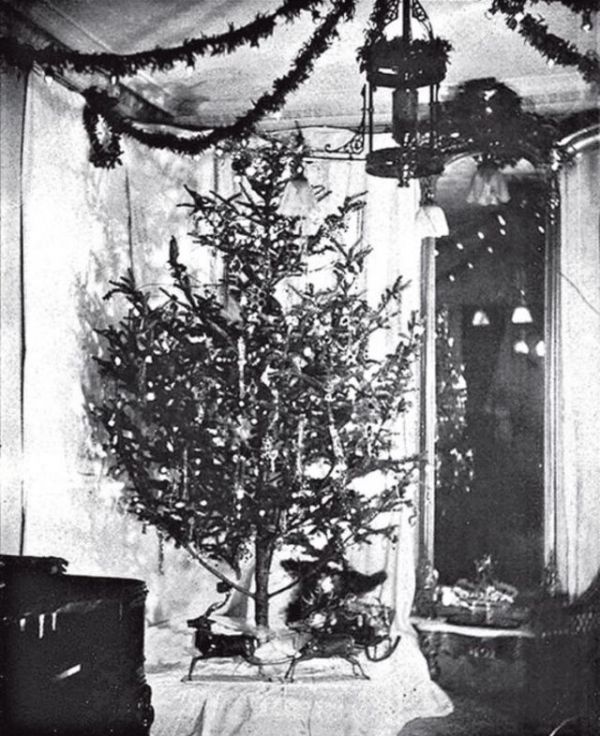 Once upon a time, Christmas trees were illuminated by burning candles. You can imagine how difficult it was to get candles to stand up on a tree branch, and how much supervision was necessary keep the house from burning down. So it was a real Christmas miracle when electric Christmas lights were introduced. The first Christmas tree with electric light bulbs was displayed in 1882 by Edward Hibberd Johnson in New York City. His tree caused such a sensation that the New York Times wrote about it.

“The tree was lighted by electricity and children never beheld a brighter tree or one more highly colored than the children of Mr. Johnson when the current was turned and the tree began to revolve.

“It stood about six feet high, in an upper room, and dazzled persons entering the room. There were 120 lights on the tree, with globes of different colors, while the light tinsel work and unusual adornment of Christmas trees appeared to their best advantage in illuminating the tree.

“The set of lights were turned off and on at regular intervals as the tree turned around.  The first combination was of pure white light then as the revolving tree tree severed the connection of the current that supplied it and made connection with the second set, red and white lights appeared. Then came yellow and white and other colors.”

That may seem overly elaborate to you and me. After all, the electric lights alone would warrant a newspaper article. But it wasn’t just a family Christmas tree; it was a promotion. Johnson was a vice-president at the Edison Electric Company. They subsequently sold Christmas lights for a price that was equivalent to a week’s wages, but in 1882, the electric Christmas tree was to promote the idea of electric light bulbs as a concept that would spread far and wide. Read about those early electric Christmas tree lights at The Bowery Boys. Or listen to the podcast if you prefer. -via Strange Company