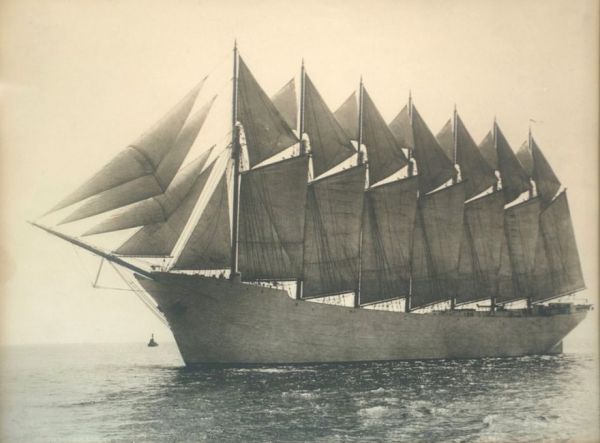 At the turn of the 20th century, steamships had fairly well replaced sailing ships. Copper baron Thomas W. Lawson was still a fan of sailing ships, and have one commissioned for the purpose of showing how magnificent and useful they could still be. It was certainly large, the largest ever, magnificent, too, and it was dubbed the Thomas W. Lawson.

Launched on July 10, 1902, Thomas W. Lawson was 475 feet long and contained seven masts of nearly two hundred feet tall each, carrying 25 sails with a cumulative canvas area of 43,000 square feet. She measured 5,218 gross register tons, boasted a carrying capacity of 11,000 tons, and was operated by a crew of only 18, when a similar-sized steamer would have required anything up to fifty. This was possible because the work of the sailors was facilitated by various mechanisms. The schooner, while it did not have an engine, was equipped with a steam steering engine, steam winches, an electrical system and even a telephone network.

When fully loaded, the Thomas W. Lawson’s draft was 9 meters. Curiously, at that time there was only one port in the United States capable of receiving such deep-seated vessels—the Newport News, in Virginia. As a result, her capacity was reduced to 7,400 tons in order to accommodate her into more ports. Even with reduced cargo, Thomas W. Lawson was so large that she was difficult to maneuver and sluggish. She tended to yaw and needed a strong wind to be held on course. Sailors likened her to a bath tub or a beached whale.

So what happened to the Thomas W. Lawson? You guessed it- it sank. Read the story of the world’s largest sailing ship at Amusing Planet.