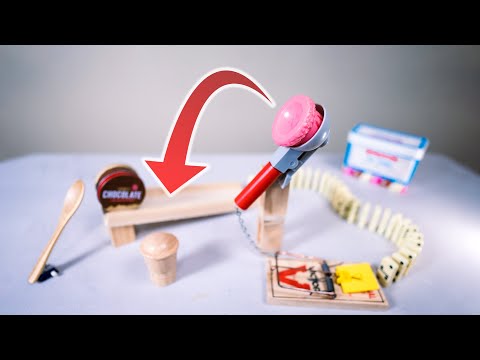 You’ve never seen a Rube Goldberg contraption like this one. It just keeps going and going, throughout the house, using some rather weird elements that I wouldn’t want to test, much less rely on. For example, I have never met such a well-mannered and reliable robot vacuum. Maybe it was the expensive kind. And you’d think testing the world’s slowest soap bar would wear it out- he must’ve bought dozens of them. Having Siri and Google Assistant talk to each other was a nice touch. There are a lot of moments that were just plain fun, like the shoes on the wheel. There are also things going on that don’t affect the chain reaction, but are just plain fun.

Professional chain reaction guy Steve Price, aka Sprice Machines (previously at Neatorama) spent four months designing, building, and testing this masterpiece. Now that he has his ice cream (with sprinkles!) he’s left with a house full of toys to put away and a really nice video. -via Geeks Are Sexy