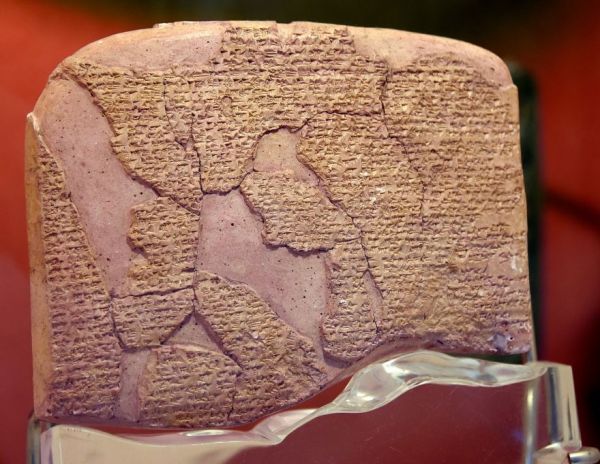 In the early 19th century, hieroglyphics inscribed on the walls of the Temple of Karnak near Luxor, Egypt, were translated and found to be a peace treaty between Pharaoh Ramesses II and the “Great King of Khatti,” later identified as Hattušiliš III. Another copy of the same treaty is inscribed on the temple of Ramesses II in Thebes. The treaty was ratified in 1258 BC, making it the world’s oldest treaty discovered so far. It’s become known as the Treaty of Kadesh.

Archaeologists determined that Khatti meant the Hittites, from modern-day Turkey. The treaty was quite an accomplishment, as the Egyptians had been battling the Hittites over the lands of the eastern Mediterranean for two centuries. In 1906, excavations in the Hittite capital of Hattusa revealed 10,000 clay tablets with cuneiform writing. Three of those tablets contained the exact wording of the treaty with Egypt, in the Akkadian language. This was a profound discovery of an ancient document between two nations in two written languages that agreed with each other in the most  important details.

The treaties laid out the points of agreement from each kingdom to stop fighting, return political refugees and criminals to their home country, and assist each other in suppressing rebellions. Furthermore they pledged to support each other militarily in case of attack from other nations going forward. The treaty ends with a curse upon anyone breaking the treaty. Read about the war between Egypt and the Hittites and the amazing treaty that ended it at Amusing Planet. -via Strange Company