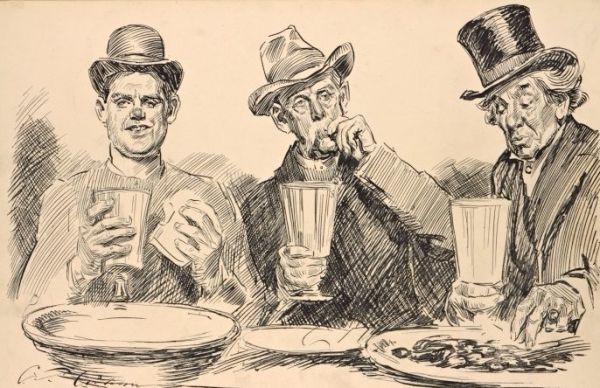 The history of liquor laws has taught us that people will find a way around them every time. Before the US experimented with nationwide Prohibition in the 1920s, states and municipalities tried every which way to stem the flow of alcohol, if ever so slightly. New York state enacted the Raines law in 1896, which explicitly forbade liquor sales on Sunday, raised the price of a liquor license, barred sales within 200 feet of a church or school, and banned free lunches.

Behind this lifestyle tug-of-war lay a cultural conflict of national proportions. Those in favor of the Sunday ban, generally middle-class and Protestant, saw it as a cornerstone of social improvement. For those against, including the city’s tide of German and Irish immigrants, it was an act of repression—an especially spiteful one because it limited how the average laborer could enjoy himself on his one day off. The Sunday ban was not popular, to say the least, among the city’s Jews, who’d already observed their Sabbath the day before.

Opponents pointed out that existing Sabbath drinking laws were hypocritical anyway. An explicit loophole had been written into the law itself: it allowed lodging houses with ten rooms or more to serve guests drinks with meals seven days a week. Not incidentally, wealthy New Yorkers tended to dine out at the city’s ritzy hotel restaurants on Sundays, the usual day off for live-in servants.

You can see how people took advantage of a loophole, but what does all this have to do with the world’s worst sandwich? The “Raines sandwich” was part of the loophole, and it was so thoroughly inedible that the same sandwich would be used for multiple customers. Read that story at Atlas Obscura.