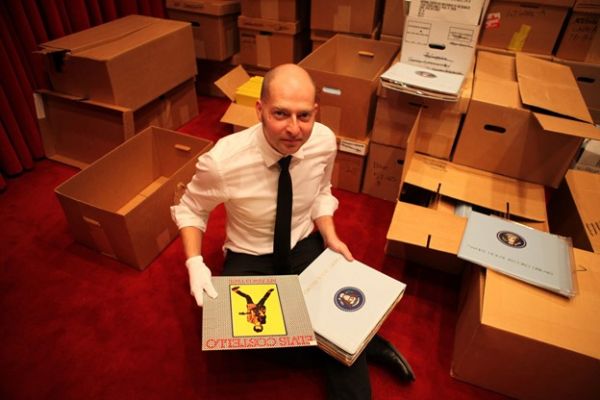 In the days before MP3 players, building a music library required physical media. One popular option for decades was vinly records. You needed a good collection to entertain yourself and guests.

It was so important that even the White House had one.

The Washingtonian shares the story of John Chuldenko, one of the grandsons of former President Jimmy Carter. He heard from former First Lady Rosalynn Carter that the White House possessed a little known record collection. As a music enthusiast, he had to learn more.

Thus began Chuldenko’s discovery of the forgotten vinyl library. He used his connections and his research skills to track down this library and its history.

In 1973, the Recording Industry Association of America (RIAA) curated and donated a collection of 1,800 records to the White House. It was their representation of the music of America. Then the RIAA updated the collection in 1981 with even more records. But, over time, it was neglected and forgotten in the vast archives of the White House.

In 2010, Chuldenko got the opportunity to examine this collection. He brought along a film crew in the hope of recording footage for a documentary:

“With every box, there was this new treasure inside,” Chuldenko recalls. “I knew what was in there on paper, but it’s different when you actually hold these records. They had never been played. It was like walking into a record store in 1979. They were absolutely pristine.”

At one point, they decided to listen to a politically charged punk-rock landmark: the Clash’s self-titled 1977 debut. “I’m so bo-o-ored with the U-S-A!” Joe Strummer snarled—a chorus that had almost certainly never rattled the walls of the presidential residence prior to that moment. “We put that on,” Chuldenko says, “and it was just like, ‘Oh, my gosh, I’m playing the Clash . . . in the White House!’ I mean, what an incredible protest record. And it’s not like I brought it myself. I am playing the White House’s copy.”

Chuldenko recorded this event, but never got enough funding to create the documentary. But he still has the footage. Hopefully, with increased attention, he may be able to produce it. Or, better still, a current or future President could open up the collection for a loud party.