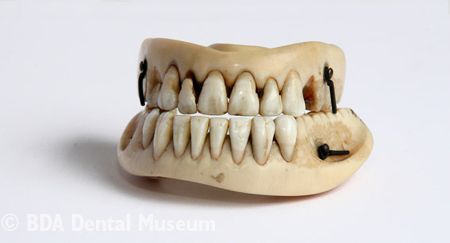 When you lose your teeth, you could have a set of dentures made with the latest space age materials, but it wasn’t always that way. It used to be that artificial teeth were made from ivory, taken from elephants, walruses, or hippos, but they didn’t look all that real, and didn’t hold up well after being chiseled into human tooth shapes. The best artificial teeth were made from real teeth, sometimes called Waterloo teeth, as they often came from dead soldiers. But they also could have been traded by grave robbers. We’ve also heard that healthy teeth were sometimes extracted from live but enslaved people for this purpose, but taking them from dead bodies was altogether easier. Waterloo teeth, of course, got their name from the Battle of Waterloo in 1815, and the practice continued at least through the American Civil War. They were expensive and gruesome, but they worked. You can read more at the British Dental Association. -via Nag on the Lake