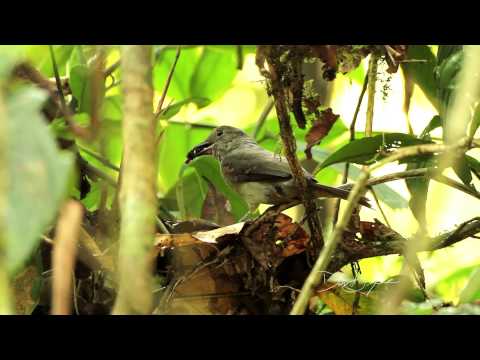 This is a nestling of the Cinereous mourner (Laniocera hypopyrra), a bird species widely distributed in Amazonia with a geographically separate population in the central Atlantic forest.

It has dark eyes with narrow orange eyering, dark bill, grey legs, rounded head and bill yielding appearance somewhat like that of a dove.

This bird species is usually rare and concealed as it dwells the forest. However, in the fall of 2012, scientists have discovered one of their nests at the Pantiacolla Lodge in the upper Madre de Dios River in southeastern Peru. Upon seeing the nest, they noticed something peculiar about the nestlings.

They observed that upon hatching, the nestlings had downy feathers with long orange barbs with white tips, which was very different from any other nestling they had observed in the area. The peculiar downy feathers attracted their attention, but the nestling behavior provided a more important cue.

While the ornithologists were collecting morphological measurements, the nestling started moving its head very slowly from side to side in a way typical of many hairy caterpillars.

While working in the area, they found poisonous caterpillars of the flannel moths (family Megalopygidae) with similar size and hair coloration as the nestling.

The scientists suggest in their paper that this is an example of Batesian mimicry (a phenomenon in which harmless animals imitate the warning signals of a harmful species; usually common in butterflies) in order to trick its predators that it is a poisonous caterpillar, when in fact it is a harmless bird. 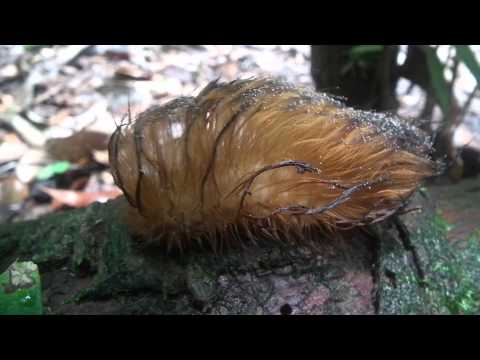