I can’t imagine a worse situation than putting a lot of effort into your Christmas dinner party, only for your sister’s teenage kids to scoff at it all and behave as toddlers do. My anger issues could never! Sadly, one person had to deal with such insolence, leading them to ask the good people of the Reddit community r/AmIthe[Jerk] whether they were in the wrong.

It’s a difficult situation with lots of nuance, but that’s what we’re here for, dear Pandas—to get to the bottom of it. So stick around for a story that is sure to bring your wine to a boil (add some cinnamon sticks and oranges for a festive treat).

As always, don’t downvote just because you disagree with the situation; don’t shoot the messenger! Leave your verdicts in the comments below and let’s dive into it! Oh, and if you’d like another story similar to this, here you go! 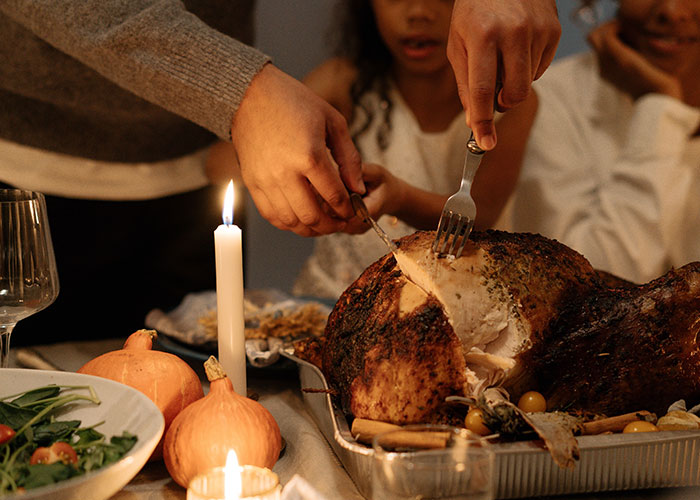 Would you be interested in some buttered bread for Christmas dinner? No, it’s not a starter, it’s your full meal. At this point, you’d probably be racking your brain for all the sins you’d committed that year that would have put you on the naughty list for this sort of treatment. However, when you’re an ungrateful spoiled little brat that’s actually not so little anymore, that’s what you end up with.

I know I’m getting ahead of myself, but I know what’s to come, and you, dear reader, don’t as of yet! But you soon will, don’t you worry bout a thing. Reddit user Suspicious-Cat1021 shared his Christmas dinner experience on the subreddit r/AmIthe[Jerk], detailing the very simple situation that turned a festive gathering into a frustrating one for all involved.

One man wondered whether they he did the right thing when confronted with such a situation. Here’s the full story: 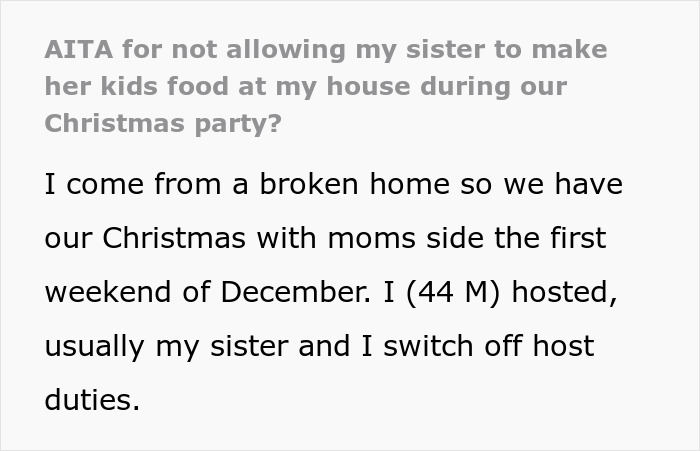 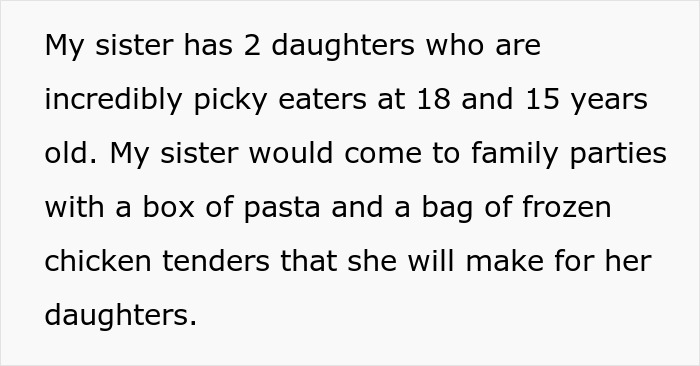 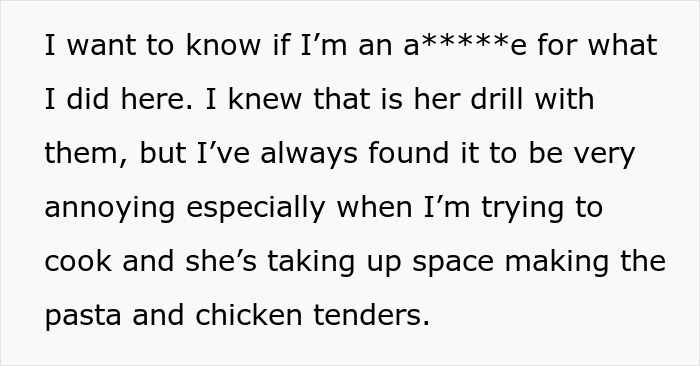 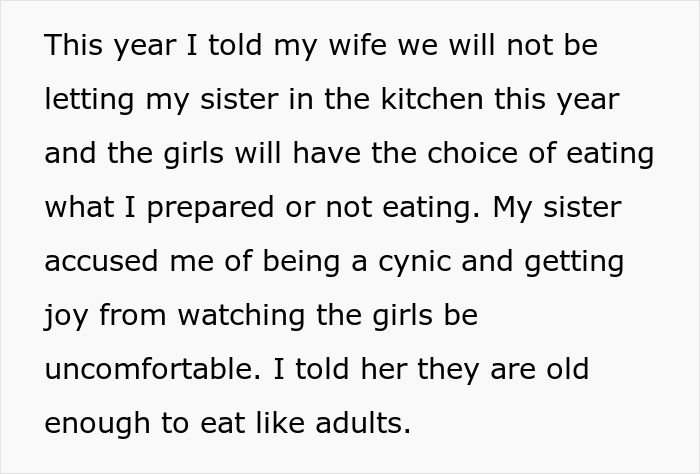 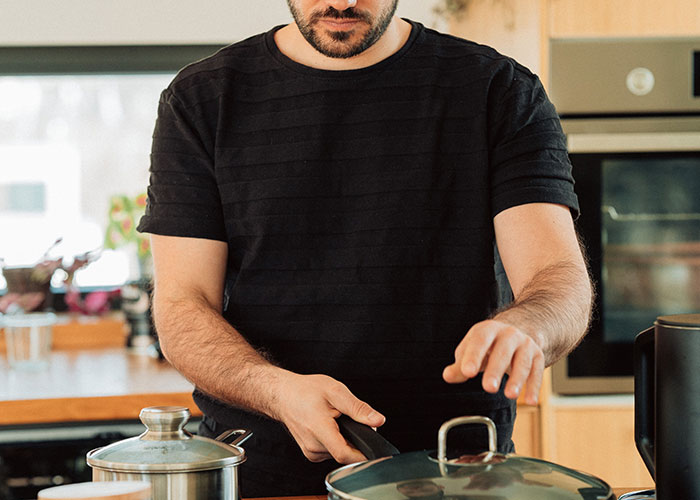 To be the devil’s advocate, let’s look at all sides of the situation we have before us at present: two picky-eating teenagers, the mom that has helped condition their eating habits, and a very frustrated and confused host.

Let’s start with what picky eating actually means. Kathryn Walton and colleagues define picky/fussy eating as an unwillingness to eat familiar foods or try new foods that is severe enough to interfere with daily routines in a problematic way. Although definitions and measures vary, 14-50% of parents identify their preschool-age children as picky eaters.

Children can become picky eaters for a number of reasons. As discussed by UCSF Benioff Children’s Hospitals, some kids are naturally more sensitive to taste, smell, and food textures, making the experience of eating all the more strange. Others use it as a means of asserting independence.

A study published in the American Academy of Pediatrics revealed that picky eating was to stay if the parents didn’t nip the behavior in the bud early enough. Furthermore, the study found that children who had difficulty controlling their emotions tended to be very picky eaters, so emotional intelligence also plays a big part. 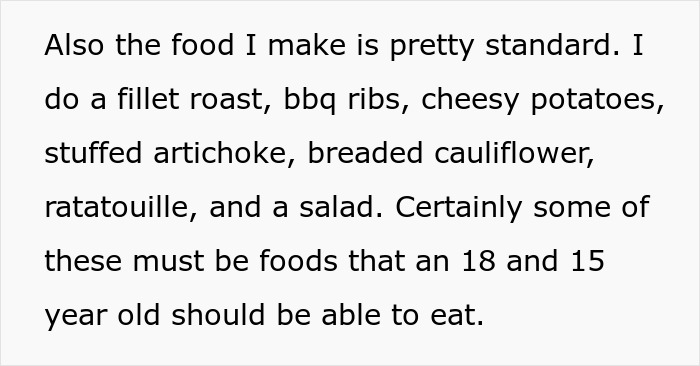 Picky eating should never warrant rude behavior, and it seems that a huge case of miscommunication is to blame 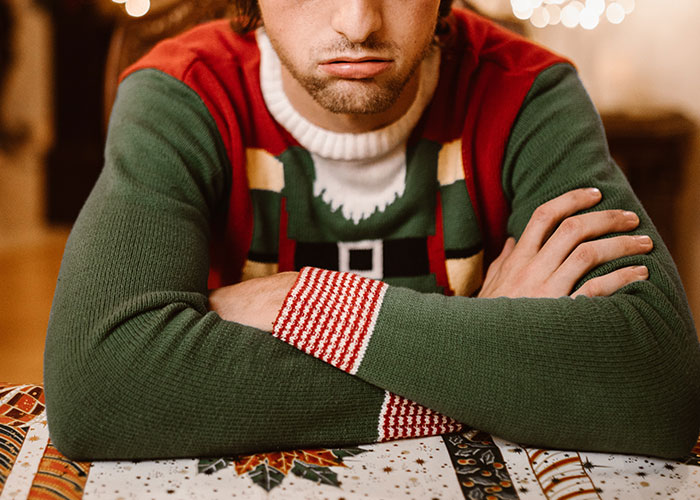 The most commonly agreed upon piece of advice from experts for parents with picky eaters—don’t cook a separate kids’ meal. The family menu should not be limited to the child’s favorite foods; let your child eat what you are eating (with no choking hazards, obviously). If your child chooses to skip a meal or a snack, he or she can wait until the next scheduled mealtime.

Furthermore, there are certain red flags in this story that should be addressed, mostly the kids’ rude behavior and the mom’s negligence to discipline them. Dr. Traci Baxley argues that teaching compassion to children requires one to start saying ‘no’ sometimes.

Giving consequences to their unhealthy actions will support their ability to see situations from various viewpoints, and teaching kids to be grateful when they don’t get everything that they ask for is a crucial element in one’s development.

You may think they’re not paying attention, but kids watch very closely to see how you respond to situations, and in this one, it seems like the mother being okay with their picky eating habits, as well as the fuss that comes with it at the expense of other people, has led to an unhealthy feeling of entitlement and judgment.

It feels as though the kids’ mom just accepted the fact that her kids want to eat one particular meal and has continued to feed their unhealthy eating habits by preparing everything herself in someone else’s home.

It seems like the mom can’t come to terms with her kids growing up, as it’s really not normal for an 18- and 15-year-old to need their mom to continuously make them special meals when they’re visiting family. So in this case, the family bringing already prepared meals for all to share during dinner could’ve been a good compromise.

But let us know your thoughts in the comments below—what do you think would have been the best solution to this issue? What would your response have been to your nieces or nephews acting this way? I hope your Christmas dinner is all the more peaceful and loving compared to this, and I hope to see you in the next one!

People online have been as divided as the family over this situation. Some supported the man’s decision and how he handled the disagreement 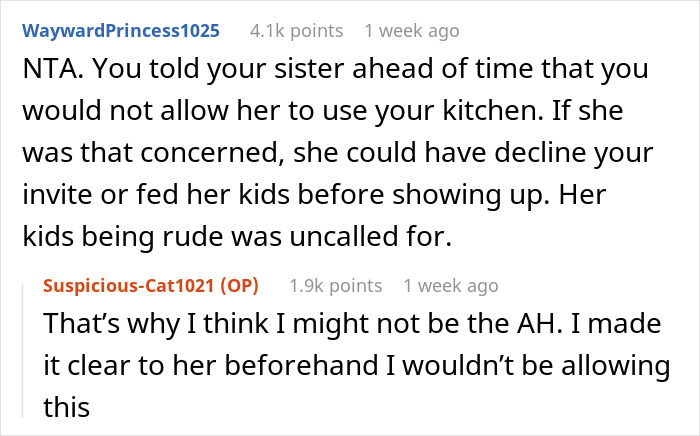 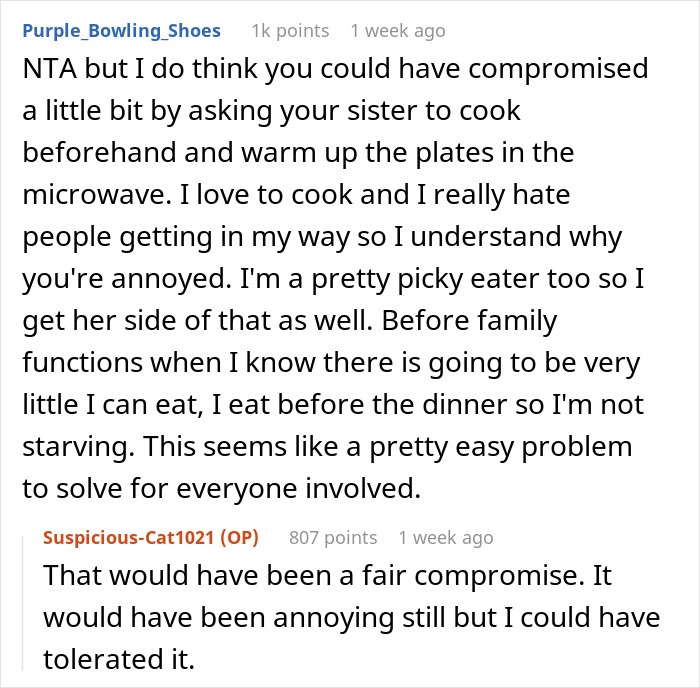 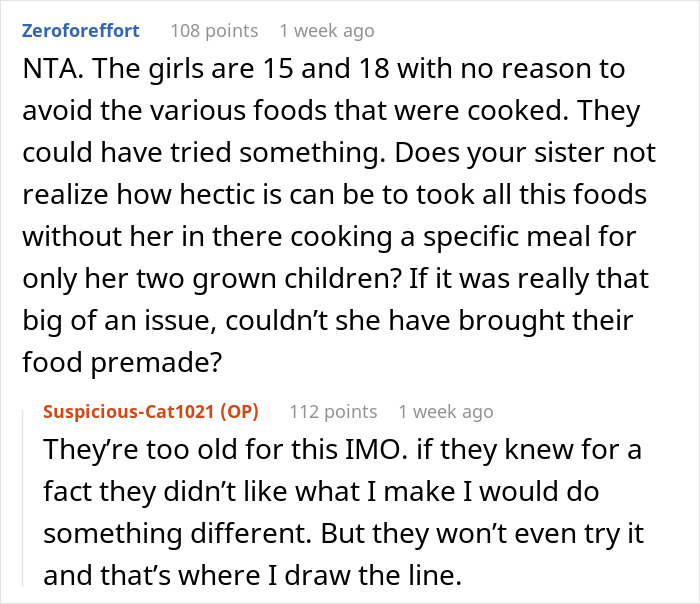 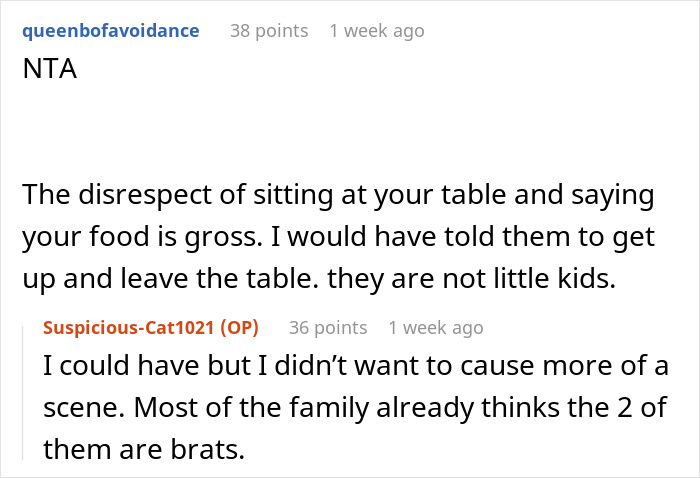 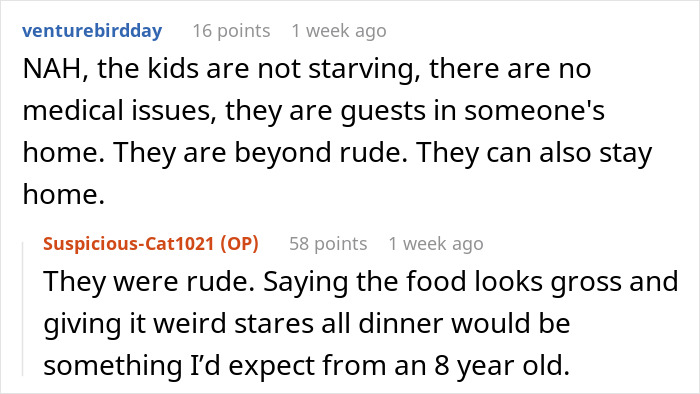 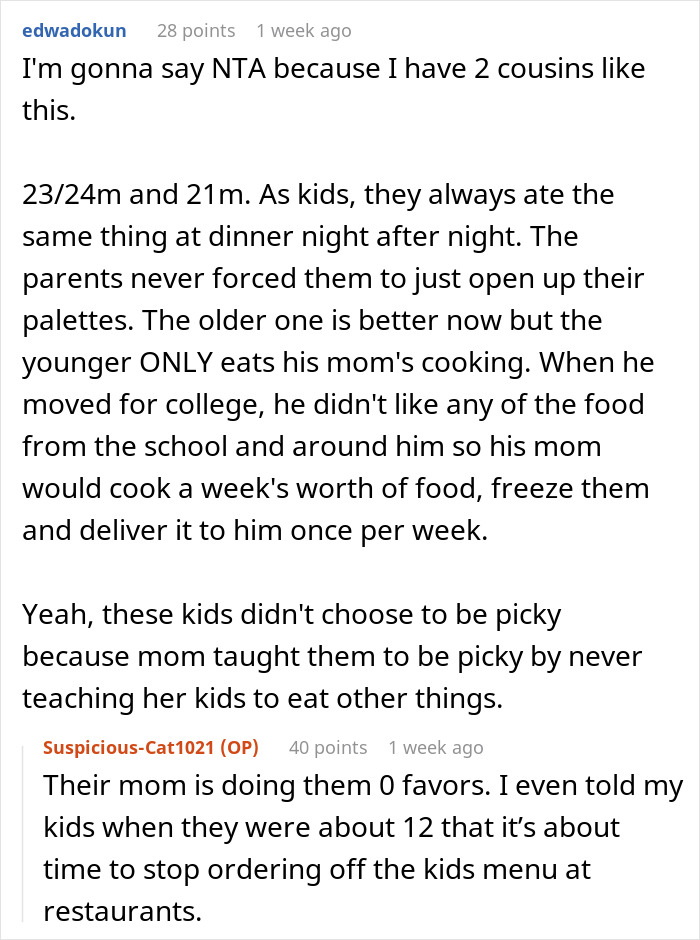 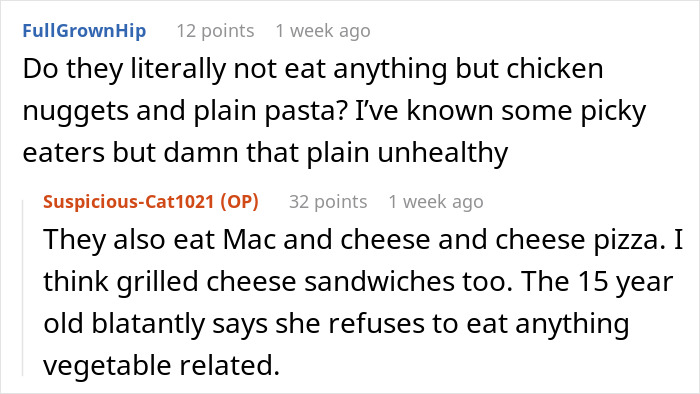 Others have not been as understanding, criticizing the man for not offering a compromise when he knew of the situation. Let us know your stance in the comments! 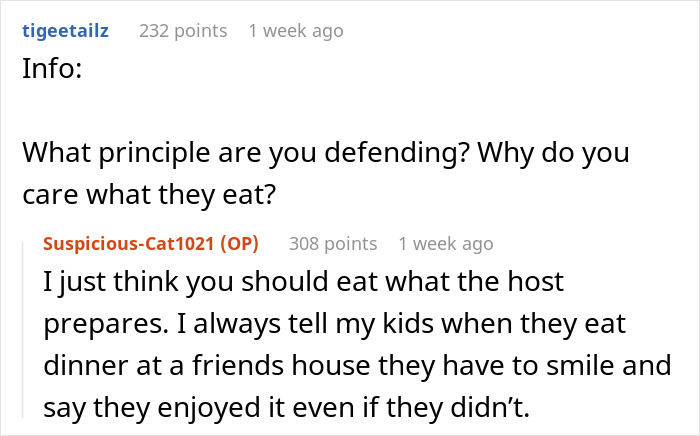 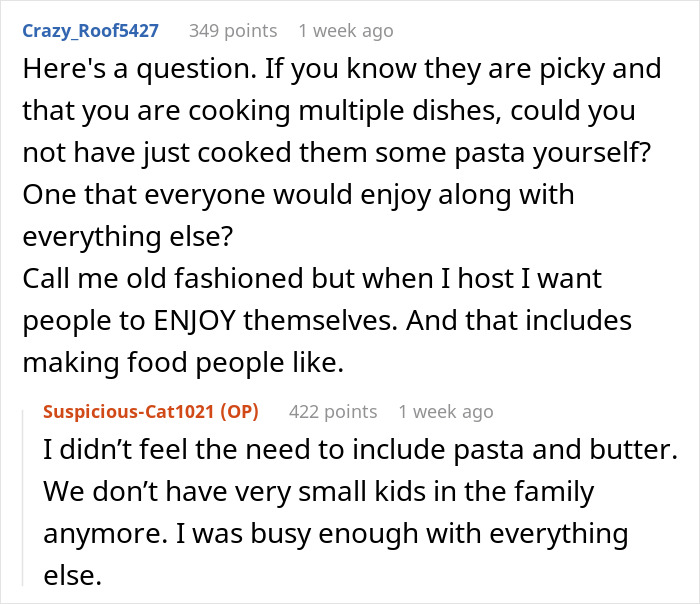 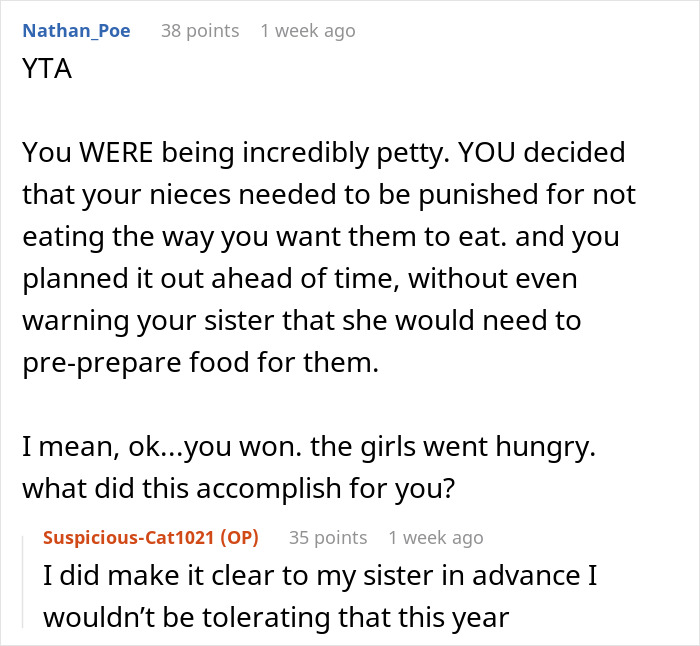 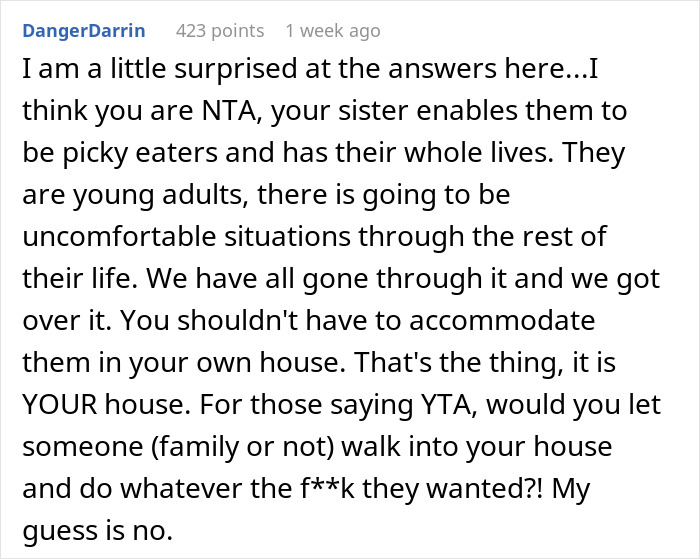 The post “They Are Old Enough To Eat Like Adults”: Man Refuses To Cater To His Nieces’ Christmas Dinner Demands, Asks Whether He’s In The Wrong first appeared on Bored Panda.