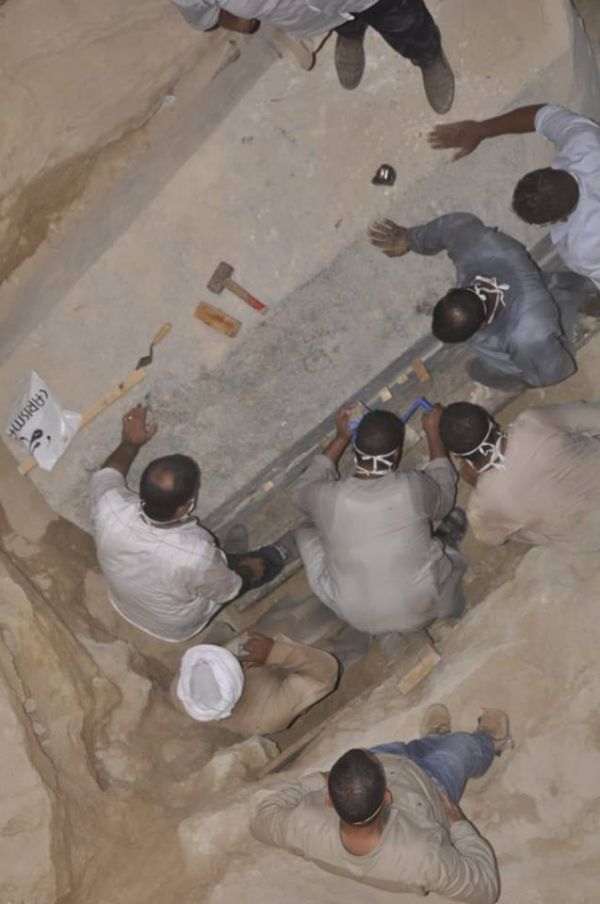 Last week we read about a black granite sarcophagus found underneath the city of Alexandria. The Egyptian Ministry of Antiquities has announced that the sarcophagus has been opened. Sadly, the archaeologists found that while the stone coffin was sealed, it was not waterproof. The contents most likely do not include the remains of Alexander the Great, but we now know why it is so big- there are three skeletons inside. The automatic English translation of the Facebook post says,

Dr. Mostafa Ministers, Secretary-General of the high council of Antiquities, directed at the head of a scientific archaeological commission to the city of Alexandria to open the sarcophagus, which was detected in sidi jaber district
And he stated. My Minister has opened the coffin, showing that it was filled with sewage, which was leaked through the grove in this area, plus three skeletons.

Shaaban Abdul, specializing in the study of mummies and skeletons, confirmed that the initial preview of bone structures suggests that they are most likely to belong to three officers or military soldiers, where one of the skeletons found a blow to the arrow. I
He added dr. I would like to say that these structures discovered inside the coffin will be transferred to the museum of Alexandria’s National Restoration Museum and study to learn more about skeletons, cause of death and historical era.
The coffin will be lifted after its initial restoration and transferred to Mustafa’s entire warehouse in cooperation with the north military (engineering body).

As expected, there were no demons inside, but it will be some time before we can ascertain whether there is a curse attached. See more pictures at the Facebook post. They may be rather gruesome for sensitive souls. -via Buzzfeed