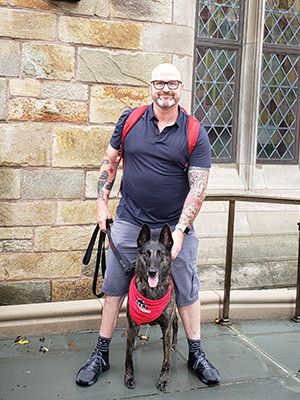 James “Jimmy” Hatch was a member of the Special Operations unit sent into Kunar, a province in Afghanistan, in July 2005. Their mission: to retrieve the bodies of 16 fallen comrades who were killed by a rocket-propelled grenade.

After the gruesome mission, Hatch says, he read a copy of Harold Bloom’s book “Genius,” soaking in the Yale professor’s thoughts and analysis around Shakespeare, Dante, Hemingway, and Faulkner. It helped to keep him sane, he says.

“I sent Bloom an email,” Hatch says. “I told him ‘I am going through a tough time and your book is like a balm. It gives me a safe place to relax and learn.’” Bloom, he recalls, emailed back a one-word reply: “Survive.”

And survive he did. This fall, over fourteen years after the perilous mission, at age 52, Hatch will be studying at Yale as an undergraduate student under the university’s Eli Whitney Students Program, a program “designed for non-traditional students with high potential who have had their education interrupted”.

Hatch’s journey has been a difficult one, he acknowledges — involving combat, injury, depression, substance abuse, and a suicide attempt. But through it all, he says, there was a lust for learning. During his frequent trips by helicopter into combat zones in Iraq and Afghanistan, Hatch read philosophers like Neruda and Epictetus by ChemLight.

More of this inspiring story over at YaleNews.