Remember those psychedelic plasma globes everybody had in the 80s and 90s? Consider interdisciplinary designer Lucy Hardcastle‘s Qualia the evolution of them, but with unlimited potential for technological advancements. The multisensory piece was recently unveiled at the Royal College of Art’s Information Experience Design graduate exhibition. The piece expands Hardcastle’s impulse to indulge our senses of touch and sight in exciting new ways, and in the process of creating Qualia, she’s invented what might be the world’s first interactive curved glass touchscreen.

Lucy’s lusciously hued, deliciously tactile work ranges from sculpture and set design to interactive media and video. Her penchant for, in her words, “tactility, visual illusions, and sensual aesthetics” is informed by her textile design background. Vibrant and hypnotic, Hardcastle’s creations tease perceptions of real and hyper-real; working in both physical and digital realms, it’s often difficult to decipher which are handcrafted, like her Phygital Objects, and which are photorealistic graphics rendered with sumptuous surfaces. Hardcastle synthesizes the serendipity of human craft with high-gloss artificiality. 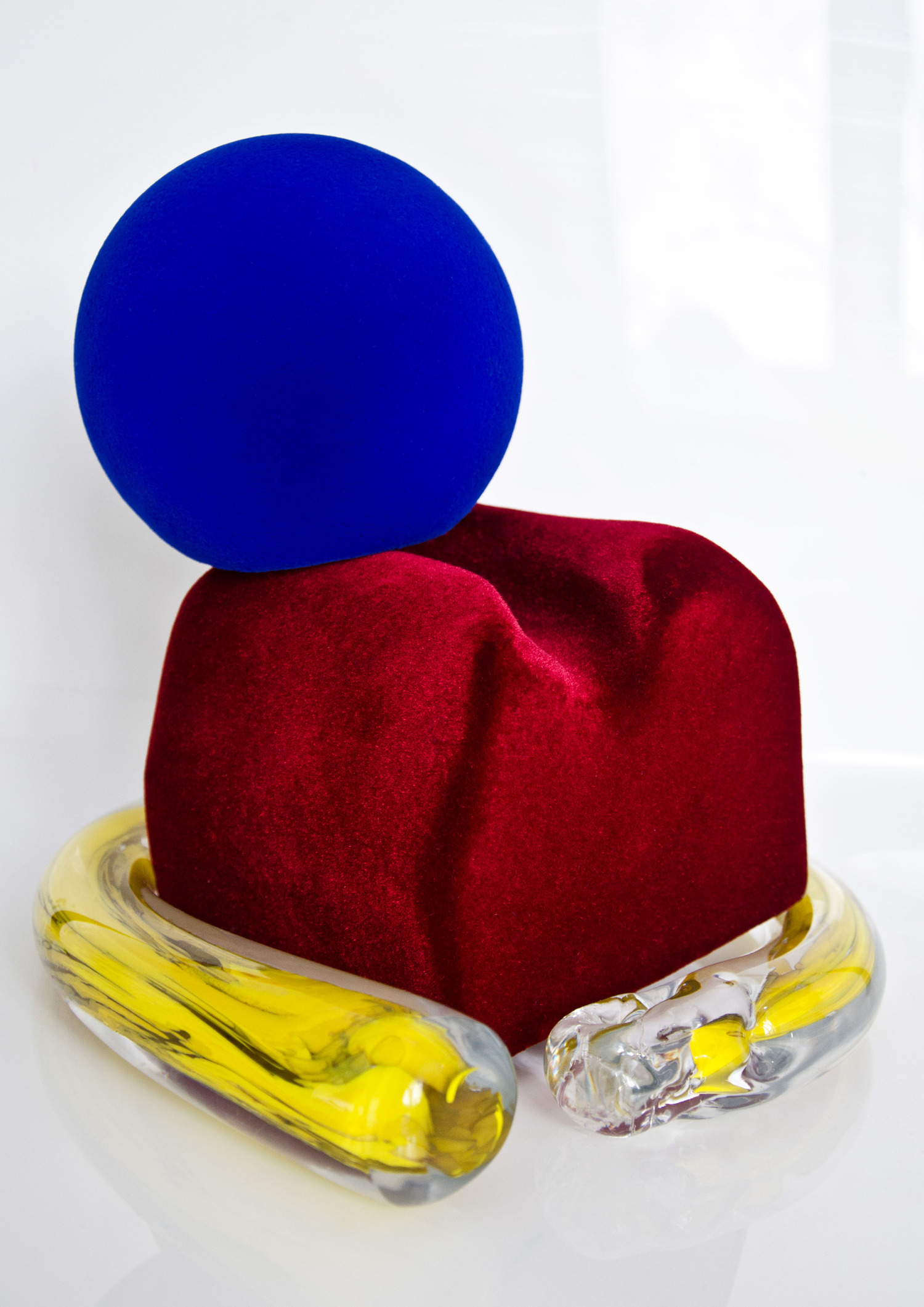 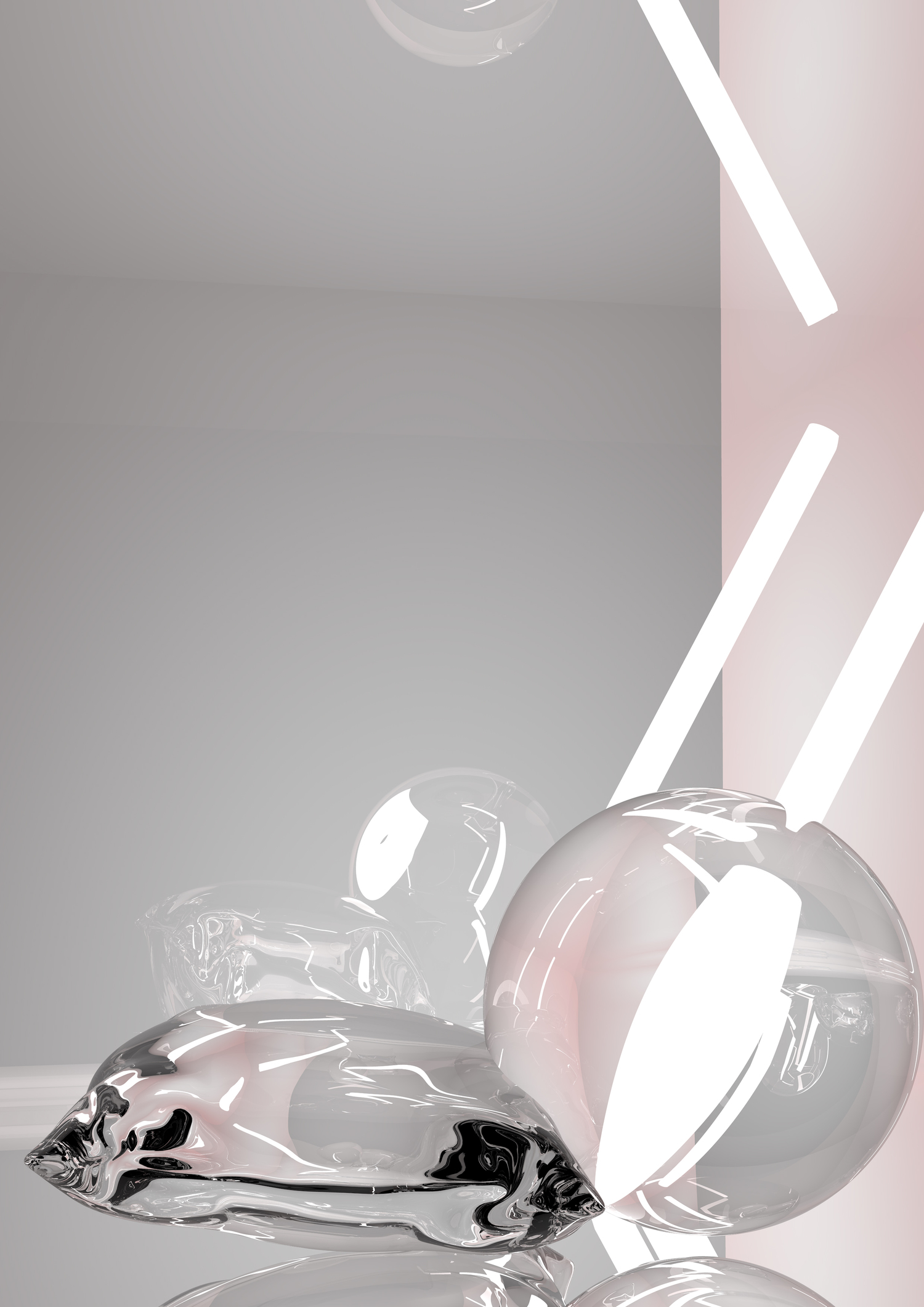 Glow by Lucy Hardcastle, 2014. Images courtesy of the artist.

Her interactive art breakthrough was The Fifth Sense, an exploration of fragrance visualized as digital spaces that i-D described as “a jewelry box of compartments and chambers to discover online—[objects] that have the duality of being hyper-real but also action filled digital responses.”

Qualia, Hardcastle’s latest innovation, is a conductive, hand-blown glass sculpture which responds to touch with light and color. Emotion and the experiential element become the focus, relying on human engagement to animate it.

“What makes this innovative is that the conductive layer which acts like a capacitive screen has never been used on a curved object or in a creative setting,” Hardcastle tells Creators. “I’ve found a way through combining techniques to essentially make a responsive glass surface that could be any shape, with many possible applications in various fields.” 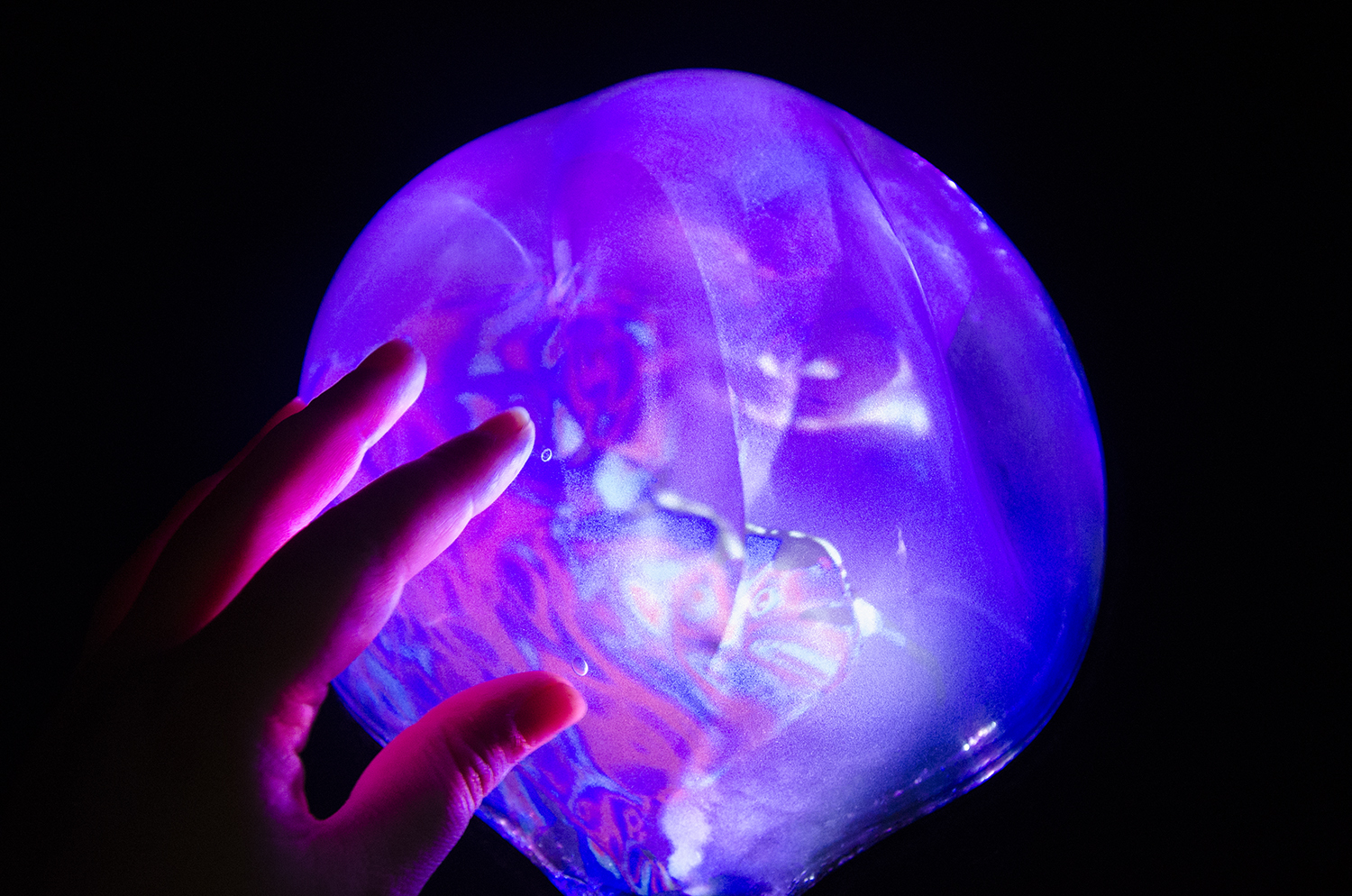 Qualia aims to promote what Hardcastle calls “material consciousness”—a noble mission amidst an age of ephemerality and immediacy. She states in the project abstract: “We are no longer connected to the craftsman behind the materials we encounter, material becoming the invisible interface, a thing that gets in the way, rather than something to be experienced within itself. In the way we engage with the output of the craftsman, so may we learn about process and engagement through the material they generate… we develop sensory and conscious knowledge based on the tactile experience with those materials.” 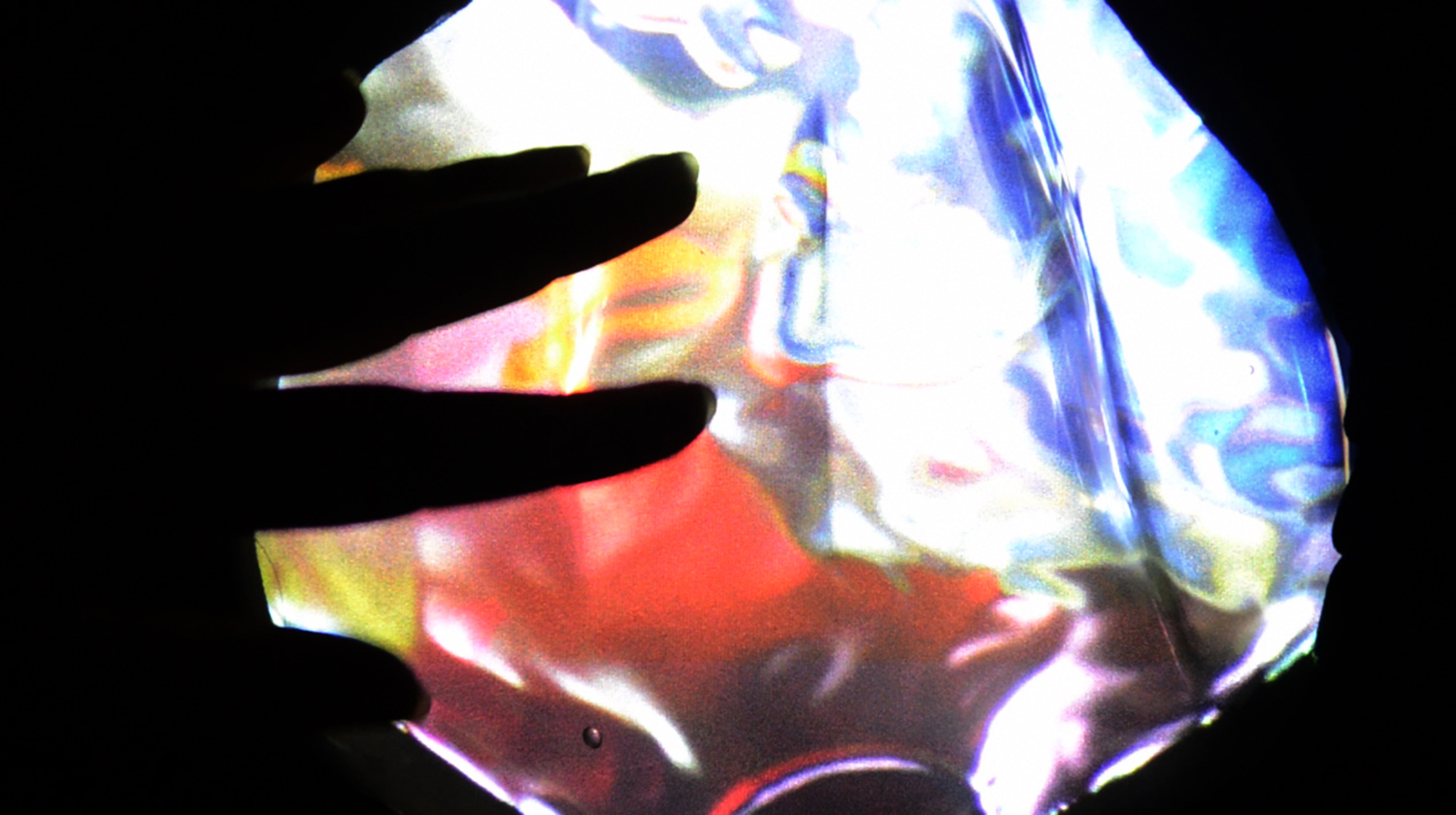 To understand the material that often acts merely as an interface, display, or barrier, Hardcastle immersed herself in glassblowing . In contrast to the flatness of glass touchscreens and their harsh, impersonal white light, interaction with Qualia‘s sensuous, organic form triggers an inviting and calming glow, drawing the user in.

Hardcastle’s invention “has allowed her to use this transparent site as a vehicle for projection mapping and infrared software to transpose bespoke visuals drawing on the chemical and mercurial properties of the conductive coating, and encourages the user to interact with the form in the way that we’re used to: an inferred sense of touch, with responsive feedback,” the press release reads. “The visuals imply a textural and responsive surface, drawing on physical experiences such as interacting with running water and witnessing its dispersal, or touching screen-based pressure points and enacting a colorful and multiple response.” Qualia is about play, experience, touch; the glass becomes the spectacle instead of a passive medium.

“The response from the show was that it was satisfying, calming and meditative. Many people wanted their own personal one and I plan on developing it further,” Hardcastle explains. It’s certainly a concept worth watching. 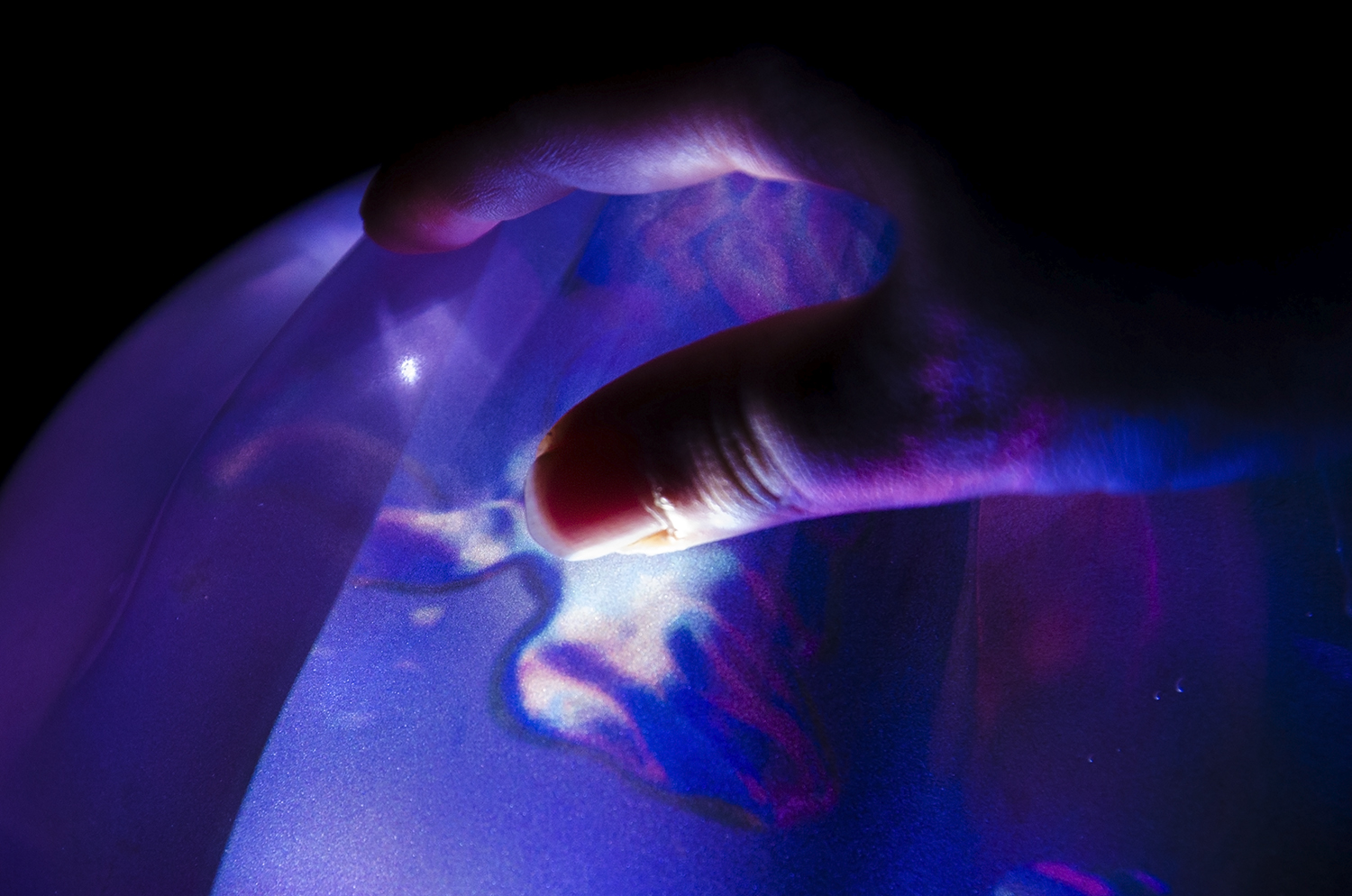 Watch Lucy Hardcastle discuss other work and her process here.

The Walls Have Feelings in Majestic Interactive Room

Interact with Animated Fluids Inside a Massive Immersive Installation

Imagine Feeling Texture On Your Touchscreen

Rating This Curved Glass Touchscreen Is a Plasma Globe for the Digital Age is 5.0 / 5 Votes: 2
Please wait...
Loading...
Related articles