In the US, there is a tradition to send Christmas cards to relatives, but with a twist. Most of us would think about cards with winter landscapes depicted on them or Santa Claus, maybe even a hand-drawn one. But in the US there is still a tradition alive of sending Christmas cards with the family’s photo on them, particularly highlighting the children, showing how they are growing up.

Taking a beautiful, cozy and smiley photo with little children is a challenge and it can require a lot of effort. At least it did for the Stanley family from North Carolina, and halfway through, they just gave up and composed a photo showing what being parents of young children is actually like. That started a tradition of a “parenting disaster” Christmas card and this year it’s the 8th time they’ve done it, so let’s take a look at what the family came up with. 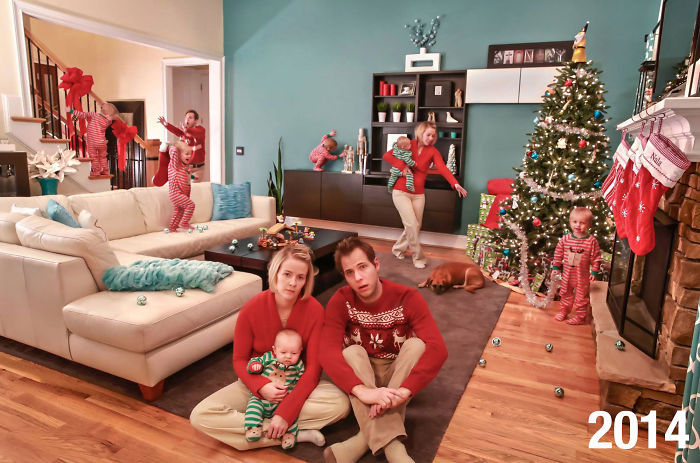 As mentioned, the tradition started 8 years ago when the dad Jonathan and the mom Jessica wanted to make a Christmas card with their then 1-year-old son Jackson. But it was actually very hard to make it perfectly festive.

In a previous interview, the family told Bored Panda, “We laughed so hard at how bad the photos were that we decided just to send them out as is and our family loved it. From there the tradition was born – instead of trying to send perfect cards, we would send something that represented the chaos of parenting.” 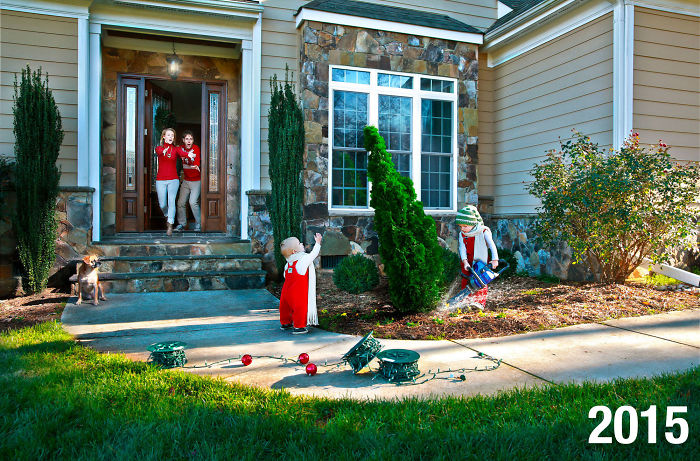 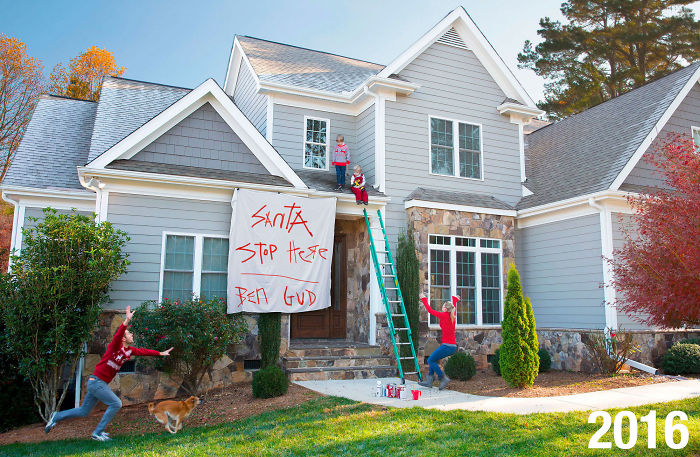 Now the family has expanded and younger brother Elijah and little sister Evelyn have joined the traditional Christmas card. Every year, the photos are more intricate as the family expands and the children are growing up.

This year we also talked to Jonathan and asked what was the inspiration behind the composition. He told us that usually he gets an idea for a photo just observing what fascinates his kids. This year the children have been watching The Grinch and Polar Express so the dad “tried to imagine how they might try to re-enact that in real life (with a little inspiration from ‘Up’)…and that’s what led to the idea.” 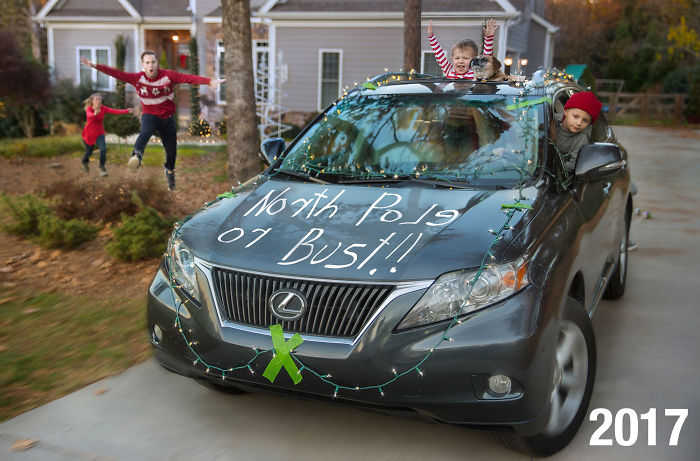 This time it’s the 8th photo that they do and they keep getting better. We asked if it’s more difficult to come up with new ideas each year and Jonathan says that it’s not the hardest part, “It’s not to come up with raw ideas – but the trick is figuring out how to execute them well and picking the best one. I try to evolve them just a bit each year as the kids get older.”

He added, “This year we thought it would be funny if my wife gave up chasing them…and instead was sitting with a glass of wine watching the chaos. That gag really struck a note with a lot of folks…funny how a small background detail is often what people comment on the most. Another one that gets lots of reactions is the fact that I wear the same sweater each year.”

It’s true, if you go to the Reddit post which now has over 62k upvotes, you’ll find plenty of comments admiring the dad’s dedication of wearing the same Christmas sweater since the first photo in 2014 and cracking up at the mom sitting on the stairs done with chasing the kids who are always up to something. 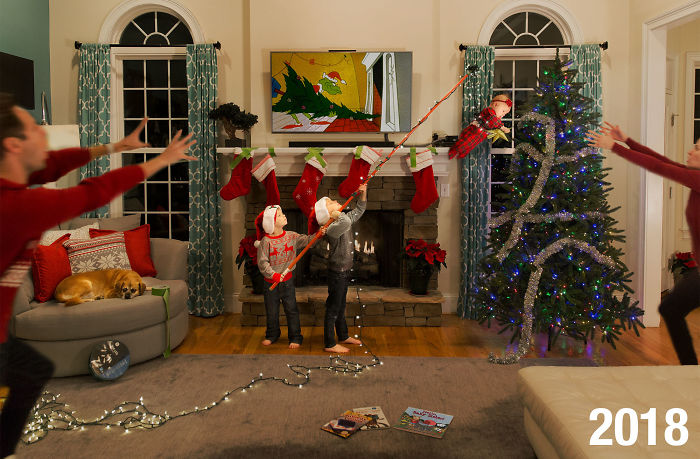 Taking family photos for Christmas cards is already a tradition, but the Stanleys made it their own and definitely more fun. The dad thinks that nobody actually likes taking those photos, especially with little children, because it’s impossible to get a perfect shot. We asked if the family has any more Christmas traditions and they actually include the usual ones like “Elf on the Shelf, baking cookies and going to visit Santa at the mall.”

Even though the photos are staged, they show chaos that every parent can relate to. Jonathan thinks that this is exactly what attracts people to these images and why they go viral every year. A couple of years ago, he told us, “People appreciate a card that emphasizes the challenges of parenting vs. hiding them. Plus a lot of people seem to appreciate that the cards are a fun thing we do together as a family. After all, the family that plays together stays together!” 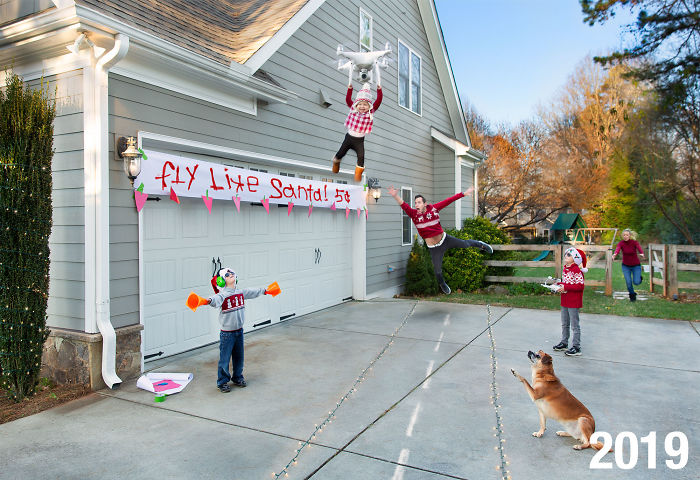 If you take a good look at the photos, you’ll see that every detail is thought of and it seems that the results are reached not without some help from Photoshop. It would be hard to achieve such quality in just a day. Actually, the process starts in a month in advance in order to have a card before Christmas.

Jonathan walked us through the process of how it all comes together, “I usually start in November, gathering any props I need and figuring out the staging and composition. I’ll walk around the house with my camera and take several options for location, then look at them on the computer and use a markup pen to sketch where each person stands. For the actual shoot, we can typically do that in 2 hours and if all goes to plan it takes me 3-4 hours of editing and Photoshop work to bring it together.” 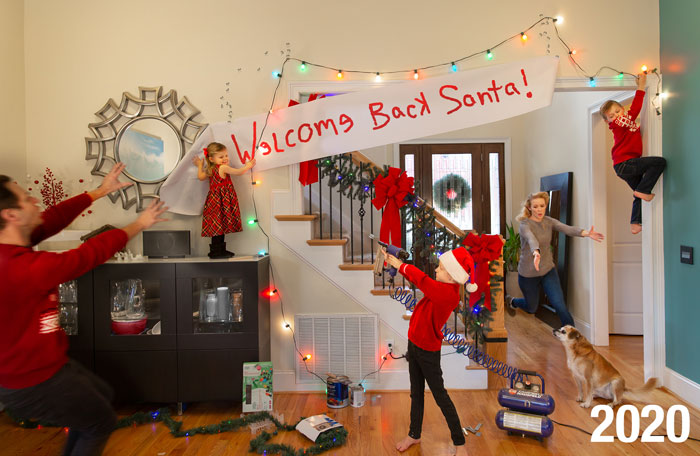 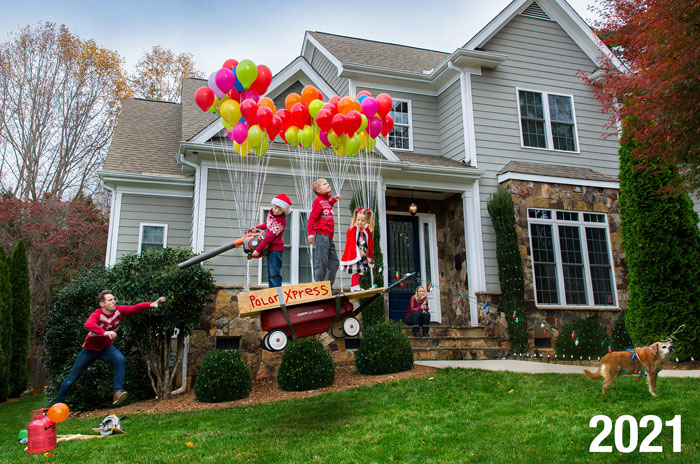 What do you think of this year’s composition? Which one do you like the most? Let us know in the comments! And if you would like to see more from the family, you can check out their YouTube channel Six Seven Eight or follow them on Instagram where they share their daily adventures.

As every year, people on the internet loved the family’s Christmas card 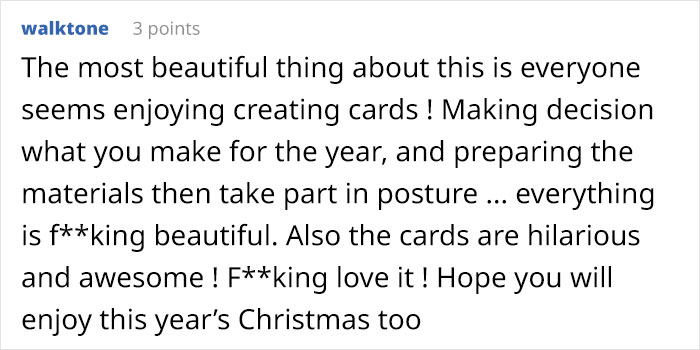 The post This Family Started Doing ‘Real-Life’ Christmas Cards 8 Years Ago And They Get Crazier As The Kids Grow Up first appeared on Bored Panda.