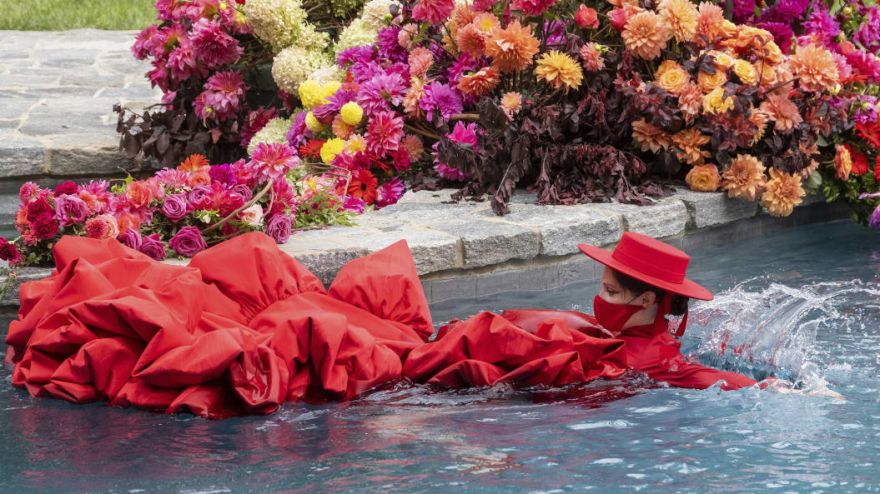 I believe that the models in this story deserve the highest praise or a pay raise. Christian Siriano decided to have a fashion show in his backyard in Westport, Connecticut. Fashion editors and guests sat socially distanced, but the models strutted on very squelchy-looking grass and crossed a small bridge over Siriano’s pool in their elaborative outfits and high heels. The Daily Beast has more details:

the models, decked in all manner of vision-obscuring ruffles, tiered gowns and diaphanous skirts and wearing HEELS somehow walked as if this were the most natural thing in the world. There was the odd stumble. Most of us would have ended up on our asses with one step.

The clothes, as ever, were for women of different shapes and sizes—even the strangest outfit, which looked like it had lots of black creatures squashed on to it. Another dress was covered in flowers.

Siriano told WWD that it had been the most expensive fashion show he had ever produced, that Sarah Jessica Parker had supplied the shoes, and that the show had been inspired by movies like Clueless (Alicia Silverstone is a friend of Siriano’s), and Don’t Tell Mom the Babysitter’s Dead, where Christina Applegate ends up hosting a fashion show at home, bridges over the pool.

Image via The Daily Beast

NASA To Announce Something About The Moon On October 26