A human-sized mix of popular culture figures such as Huckleberry Finn, Howdy Doody, and Alfred E. Neuman hangs by metal chains from a massive scaffolded rig set up inside the Stedelijk Museum Amsterdam. The chains bounce the diabolical animatronic from one edge to another, pulling it up and down, violently smashing it against the ground, then dragging it around in a sinister choreography defined by an unseen computer program. Colored Sculpture, the 2016 work by American artist Jordan Wolfson, evokes the same feeling as that scene from Apocalypse Now, in which a Vietnamese village is bombarded by American helicopters to the tune of Wagner’s Ride of the Valkyries: artificially generated furor.

As philosopher Jean Baudrillard describes in his book, Simulacra and Simulation, the feeling that the scene creates surpasses any moral analysis, is devoid of moral judgement. Thanks to technology and special effects, the film doesn’t just show the war, it makes you experience it. This, I think, is why MANIC / LOVE, the first of Wolfson’s two-part series at Stedelijk called MANIC / LOVE / TRUTH / LOVE, is so discomforting. 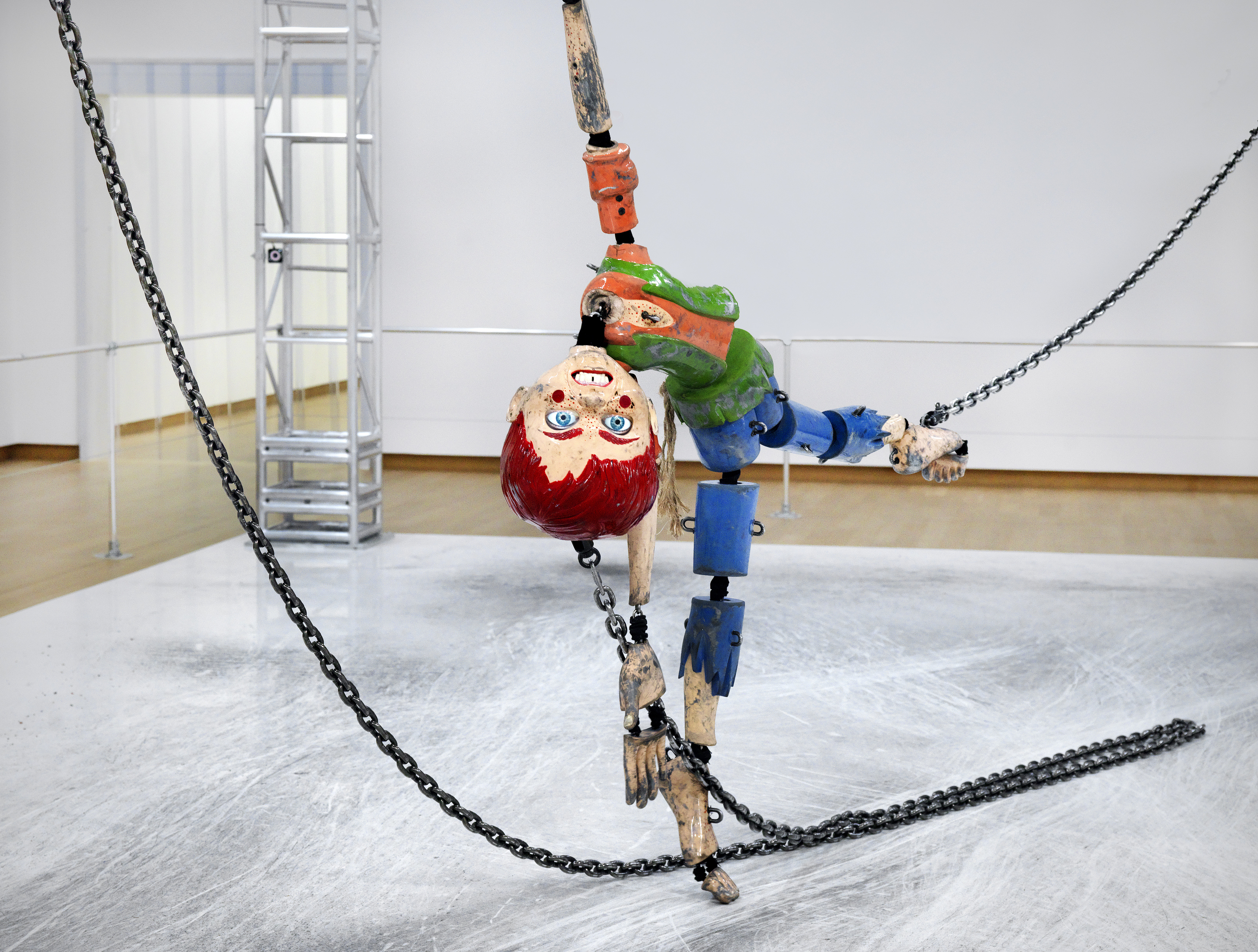 Like in Apocalypse Now, thanks to special effects and technology, the creature feels weirdly human to the viewer. Much of the discomfort comes from the encounter between the spectator’s and the marionette’s gaze. It’s alive through animatronic technology and it keeps looking for human empathy, perhaps even compassion.

How is it possible not to feel something when the figure that visually encounters the viewer’s eyes with its own falls way too suddenly to the ground as Percy Sledge’s ballad When a Man Loves a Woman (1966) stops playing? The expected climax led by the emotional melody never consummates, but is cut off abruptly and replaced by the sound of the chains rubbing against the metal structure, and then, an uncomfortable silence. 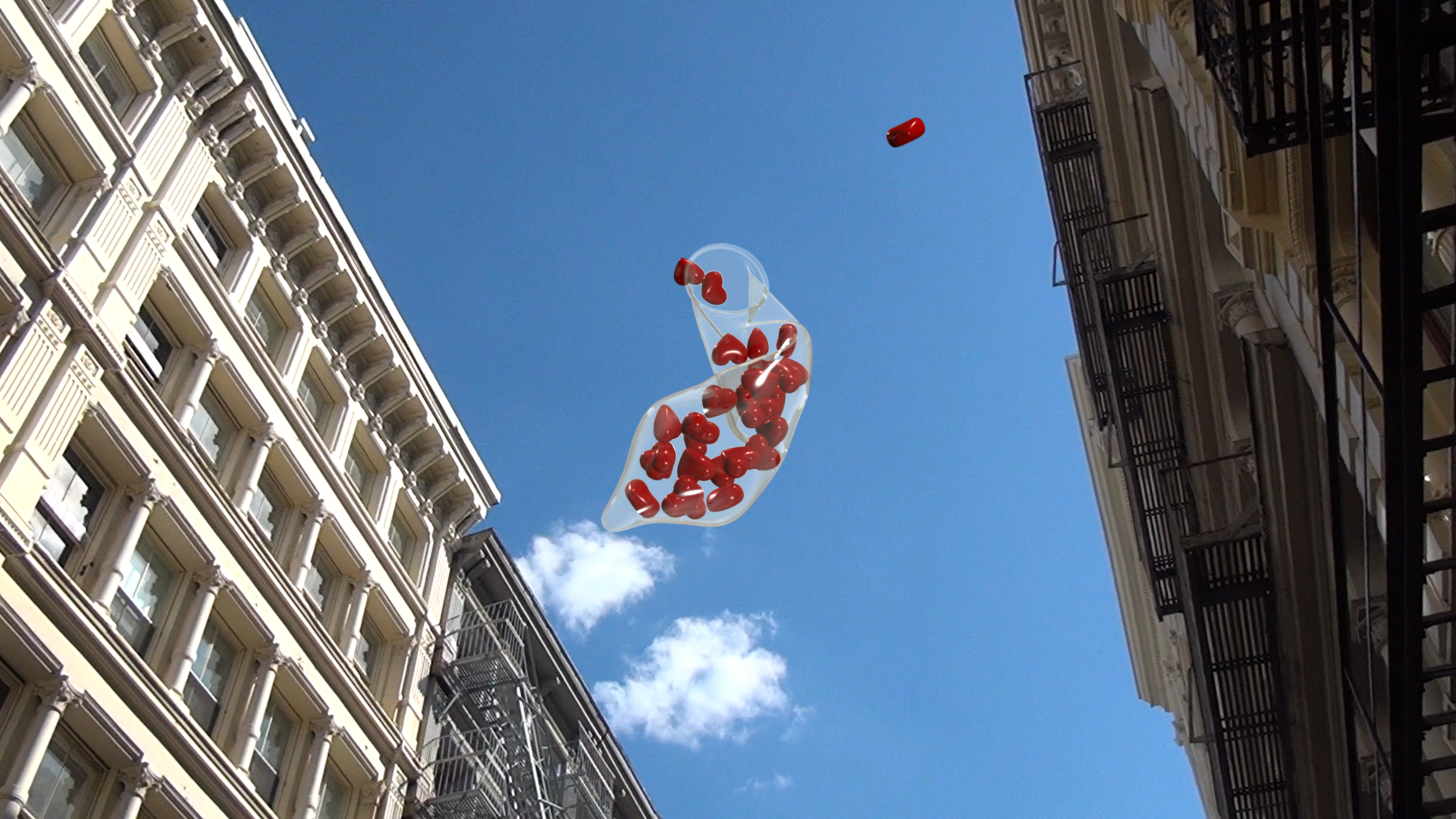 The same feeling of disquietude and lack of fulfillment appears in video work Raspberry Poser (2014). The movie is a pastiche of stock imagery: New York Soho furniture stores, antique pornographic drawings, and an animated cartoon character stabbing himself and disgorging his intestines. A giant, 3D-animated condom filled with hearts alternates with an animated HIV virus, both floating on the top of the other images. The virus mutates into icons
such as the anarchy symbol and the triangle logo of ACT UP, while the stock imagery and drawings lead to Wolfson’s punk alter ego, casually lingering in a Parisian park. This Wolfson stares directly at the viewer with a mocking smile. 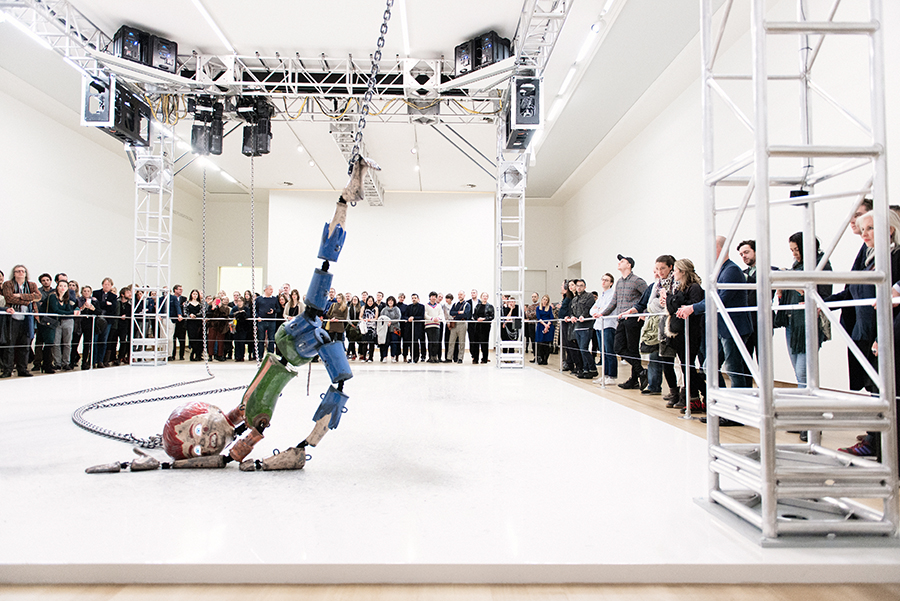 Wolfson’s taunting attitude, refined in later works, is already present in the early film In the Crisis (2004). In it, Wolfson worships iconic artists, such as Robert Smithson or Olafur Eliasson, in a redundant, histrionic speech recited and recorded in the interior of a church, with Georg Friedrich Haendel’s Sarabande playing in the background. The artist questions his future from a youthful, inexperienced perspective. 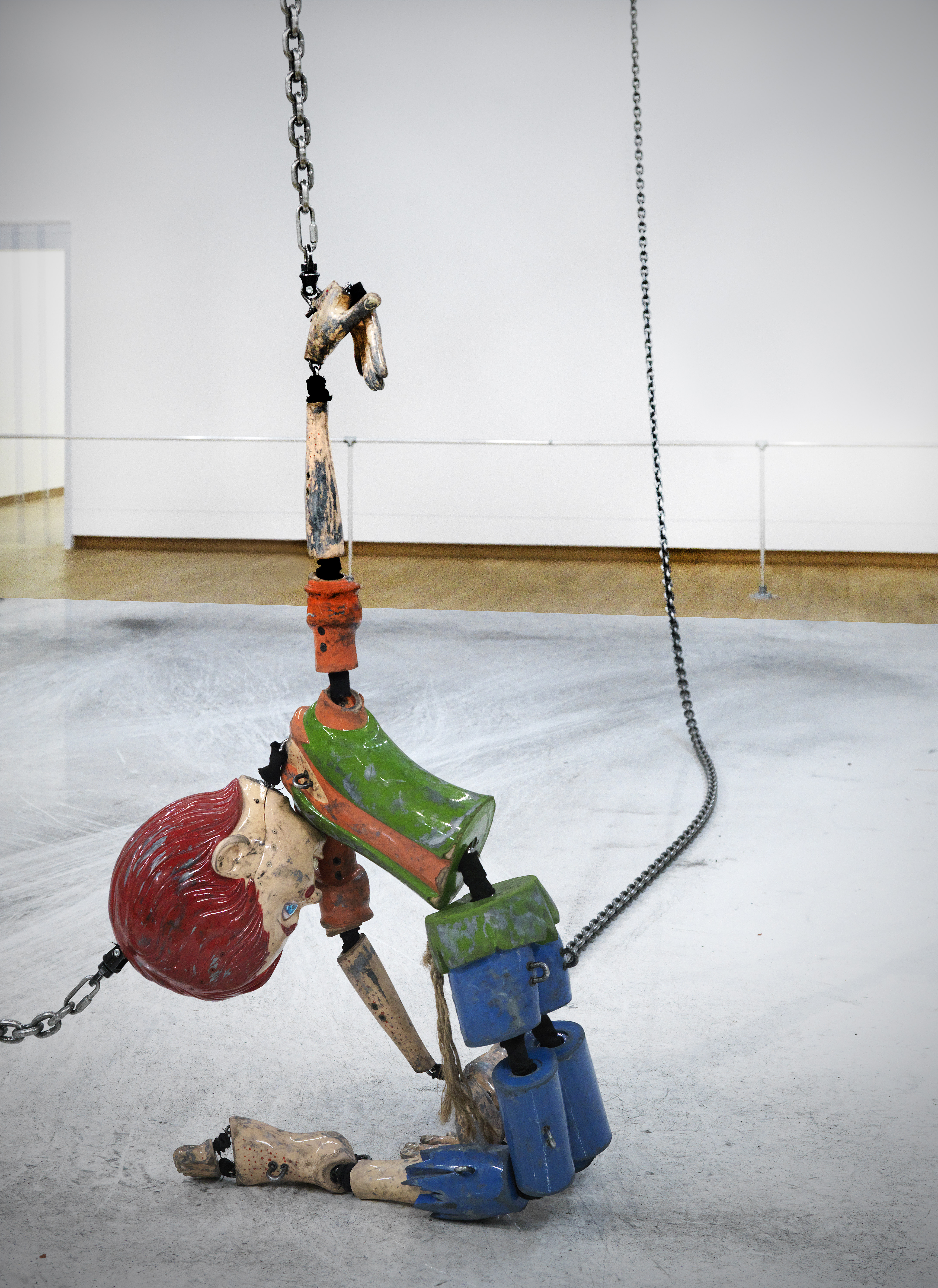 The show MANIC / LOVE traverses the artist’s trajectory from a cheeky but technically humble body of work to a similarly cheeky, yet quite sophisticated apparatus, overlapping a wide range of references from popular culture, while alluding to the self-contained sexuality and violence in an ever-contradictory society. Wolfson’s work aspires to be beyond morals: like in Apocalypse Now, according to Baudrillard, there is “no real distance, no critical sense, nor desire for raising consciousness.” It sum, “without being rotten with the psychology of war, it is the war.” 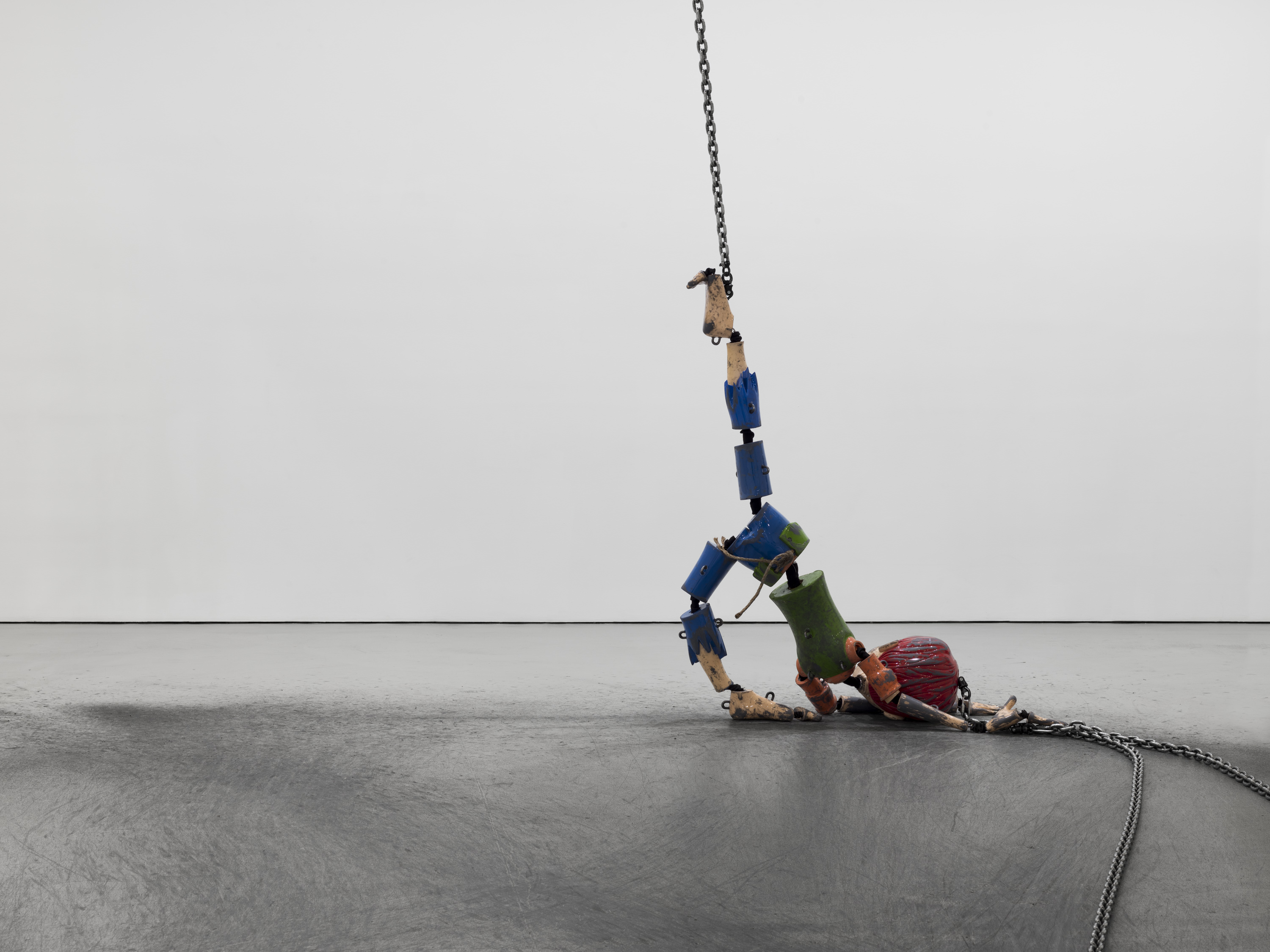 These CGI Hunks Are Just Bags of Male Tears

Step Into A Real Life Matrix