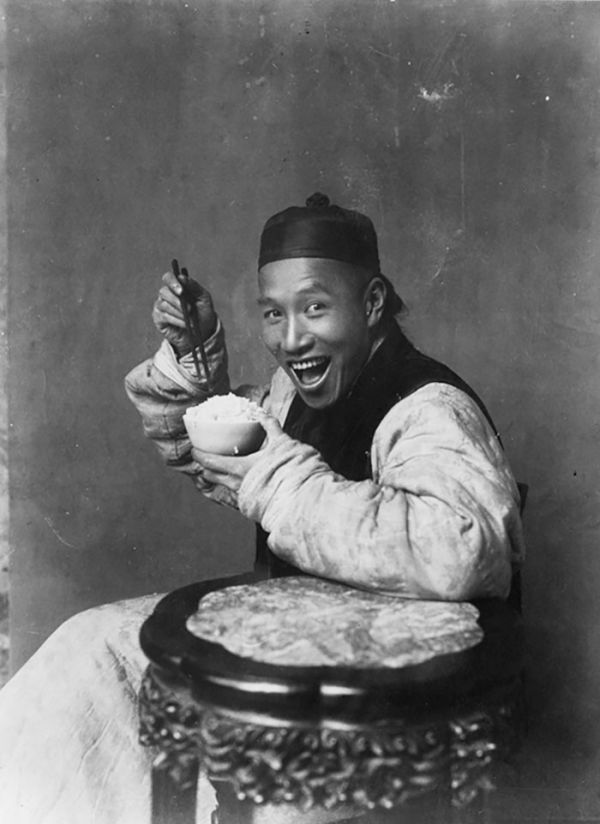 This guy, gleefully enjoying a bowl of rice, could easily pass for a modern advertisement or a stock photo. A lot of folks assumed the photograph was faked for internet points. You must admit it is a delightful image, no matter where it came from. The American Museum of Natural History confirms that it came from China over 100 years ago.

The photo was taken during Jacob H. Schiff Chinese expedition when a young German scholar Berthold Laufer was sent to China to investigate the foreign culture. During the 3 years long expedition Laufer gathered 143 photographs, however, there is no information on how he acquired them because there is no evidence that he took the photos himself. There is also no explanation who is the Chinese man in the photo and why he decided to strike a pose like that. However, some people speculate that when a man was asked to pose for a photo, he wasn’t aware of a western tradition to keep s serious face during the process.

Schiff was in China from 1901 to 1904, so the photograph was taken before he returned, but the exact date is unknown. The problem that people have is the smile: we all know that no one smiled in photographs back then. That’s obviously not true. Read more about the photograph and the questions surrounding it at Bored Panda.

Rating This is Not an Advertisement is 5.0 / 5 Votes: 4
Please wait...
Loading...
Related articles