American workers have long been notorious for shortening, postponing, or canceling their paid time off (PTO). But as the summer-getaway season draws to a close, this seems to be a thing of the past: the US is becoming a better vacation nation. According to a recent survey by Allianz Partners USA, workers are vacationing in numbers unseen in years. Nearly 60% of respondents revealed they took at least a week off in the past year — more than in any year since 2009 when the insurer began conducting the survey.

As people finally take opportunities to unwind from their daily tasks, one question pops into many minds: when is the best time to leave the office? Well, this very topic is at the heart of a heated debate that recently swept through TikTok.

It all started when TikToker Chelsea posted a video where she urges workers to schedule their PTO for the holidays, claiming that people can snag a 10-day vacation for just four days of PTO. Immediately, the platform erupted with reactions ranging from kudos to appreciation to rejection. It didn’t take long for another content creator, Dillon, to criticize her advice and warn workers against it. Scroll down to read what they had to say about the topic, and be sure to weigh in on the discussion in the comments. 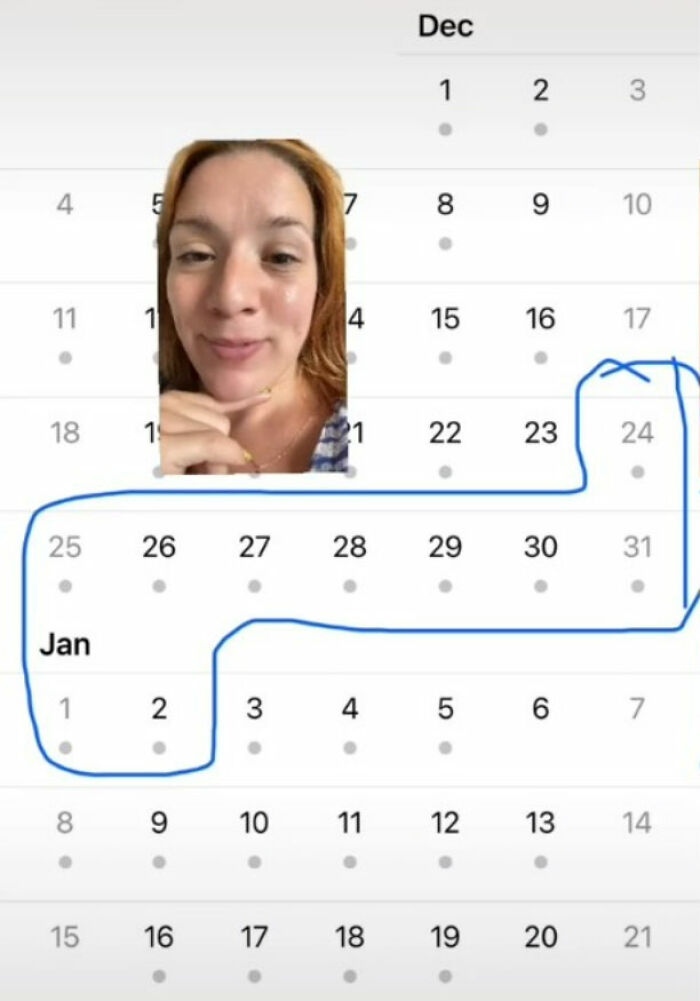 She claimed that by taking only four days of PTO, workers can have a 10-day vacation 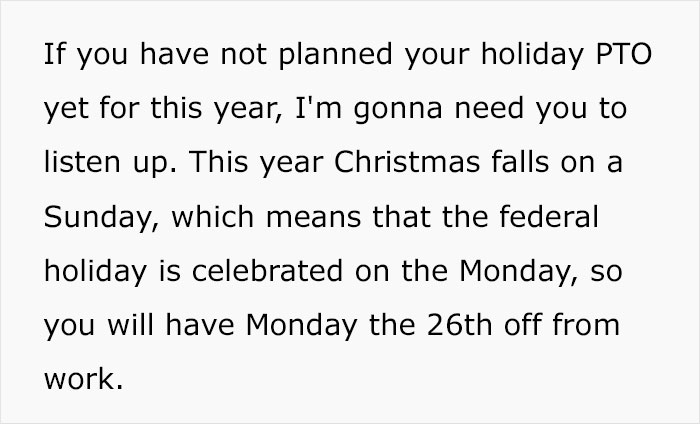 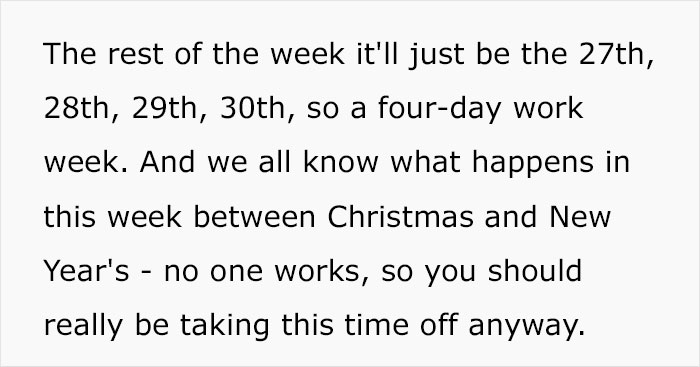 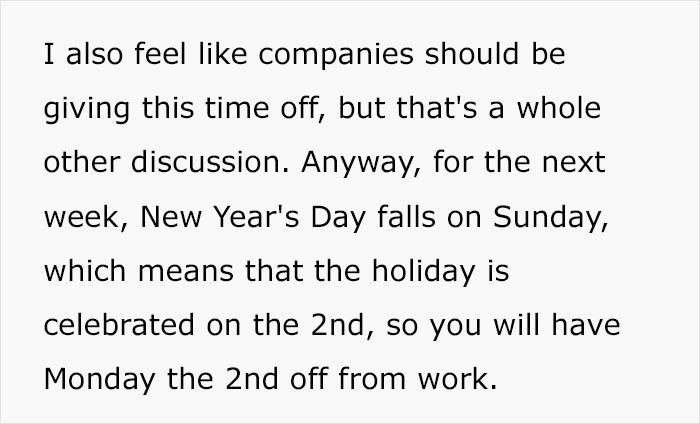 Watch the video, which got more than 5.2 million views, right here

After watching Chelsea’s video, people wasted no time in sharing their opinions on the matter. Some TikTokers appreciated her approach to leverage federal holidays in combination with PTO, especially if there’s an increased workload during that time at their organization. However, others suggested that taking a break between holidays is a waste, as this is when many workers feel the festive spirit and do the absolute minimum to get through the work days.

The topic sparked a heated debate between TikTokers as many people have different preferences on how to spend their precious time off. After all, even when the Bureau of Labor and Statistics reports that more than 70 percent of employees have at least one form of paid time off, people usually schedule it cautiously. In 2021, over one–third of private industry workers received only 10 to 14 days of paid vacation after one year of service, far less than in most advanced economies.

According to a 2022 infographic by Namely, people tend to take the longest vacations in summer. But when it comes to requesting time off the most, it happens during the most wonderful time of the year — the holidays — with December being far the most popular month for workers to take PTO.

Later on, TikToker Dillon responded to this clip and warned employees against her advice 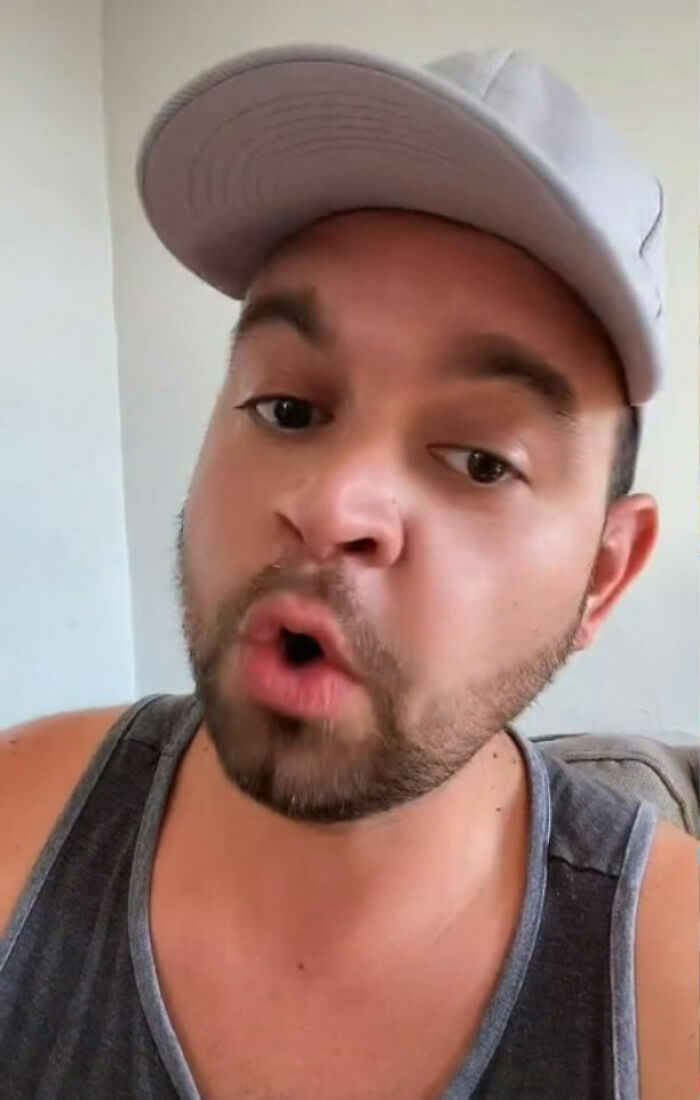 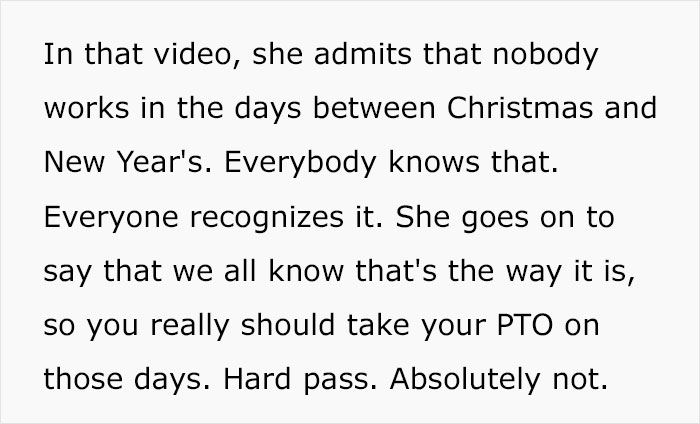 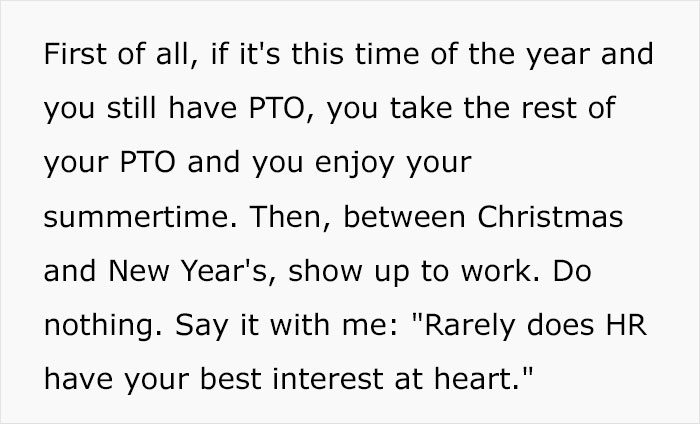 // Do not do this. This is terrible advise. Do not take HR’s suggestions for when you should take PTO. They will tell you to take PTO between the holidays while your coworkers clock in, do nothing and hold onto their PTO.

THIS IS ADVISE THAT HELPS THE COMPANY AND THE COMPANY ONLY — NOT YOU, THE EMPLOYEE, YOUR TIME OFF, YOUR HOLIDAYS WITH YOUR FAMILY, YOUR MENTAL HEALTH, YOUR WALLET OR YOUR PTO.

Also, weekends and federal holidays aren’t “vacation” days, Chelsea, they’re rights given to the workers of the world, so it’s actually a five day “vacation” youve outlined where no one’s doing anything anyway.

When TikToker Dillon shared a different point of view with the platform last week, many users also stepped in to agree that applying for leave when there’s a dip in productivity lacks logic. The creator reiterated his insights in the caption and said people should be cautious about suggestions when it is best to take PTO.

“[HR] will tell you to take PTO between the holidays while your coworkers clock in, do nothing and hold onto their PTO,” he wrote. “This is advice that helps the company and the company only — not you, the employee, your time off, your holidays with your family, your mental health, your wallet or your PTO.”

In response, Chelsea commented on his video, stating it all comes down to personal preference. She usually prefers to take that week as vacation and spend time with loved ones, rather than “sit in an office with nothing to do”.

While the internet is divided on this matter, everyone can agree that no matter the time of the year workers schedule their PTO, taking a well-deserved break is crucial for our physical and emotional well-being. As Selena Rezvani, a leadership expert, speaker, and author of Pushback: How Smart Women Ask — and Stand Up — for What They Want, told Bored Panda in an earlier interview, the hustle culture is real. “Research shows North Americans are the most stressed-out workers in the world. If you think about it, it’s hard to be results-obsessed and NOT get burned out.” 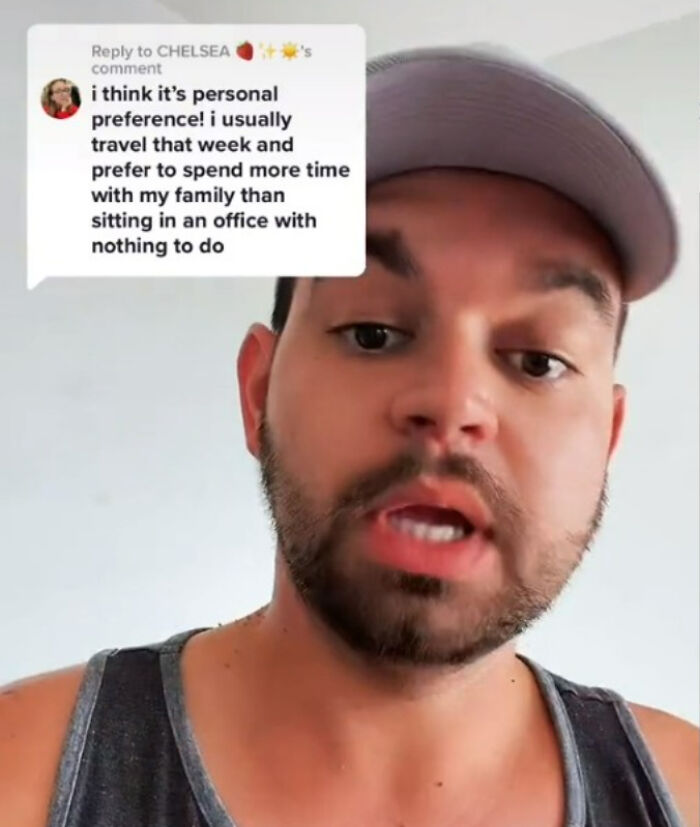 Moreover, employees may feel hesitant to leave their projects and lose their boss’ or co-workers’ respect, something that prevents them from going on vacation. According to Rezvani, PTO guilt is a real issue in the corporate world.

“Employers need to stop vacation-shaming and incentivizing people to have ‘perfect attendance’,” she told us. “People can and should be able to judge for themselves when they need time off (and of course to make an effort to help operations run smoothly while they’re gone).”

When it comes to the best ways to use your paid time off, the expert suggested extending your break when the company is closed, taking your birthday off each year, or taking a day here or there for joy, self-investment, socializing or alone time.

“If you personally have little PTO to work with, say one week, you can use the piggyback technique of tacking on one additional day off to an already short week say, a federal holiday. That gives you a longer period off and a shorter workweek to look forward to,” Rezvani said.

At the end of the day, everyone is in a different situation at home and at work, so it’s important to determine what works best for you. What do you think of the videos TikTokers shared on the platform? Which side are you on? Let us know where you stand on the matter in the comments, we’d love to hear from you.

Others sided with Chelsea, saying that using PTO during the holiday season is a good idea