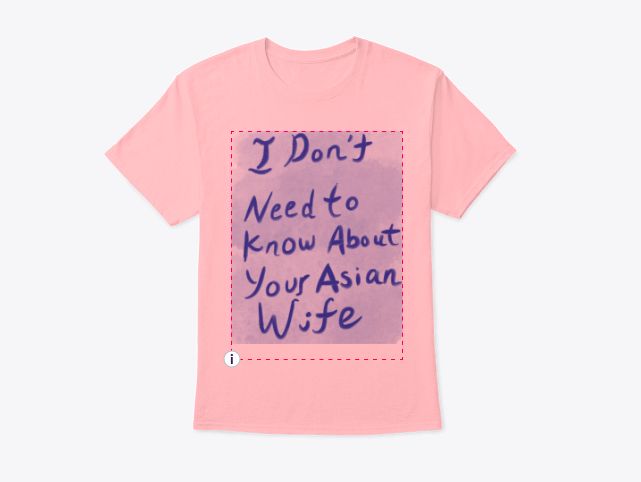 After getting “a little scrappy” with a man who suddenly mentioned his Asian wife as a way to disagree with her in a conversation, international relations researcher Rui Zhong decided that she’s had enough.

“I was doodling around on my tablet and was like, you know, I’m really sick of people using Asian wives as some kind of credential,” Zhong said.

And so, she wrote these words.

“I drew it out, slapped it on one of those T-shirt websites, and I guess people sort of connected with that kind of feeling.” By July, Zhong’s shirt was real, sold through her store Cancel Couture, and boosts from popular figures in Asian Twitter had earned it a level of viral fame.

Lots of people tweeted about Zhong’s shirt. Those tweets became viral, and this shocked Zhong.

“I made this as a joke—what is happening?”

The “wife guy” is well-known: a man who “defines himself through a kind of overreaction to being married,” the New York Times’s Amanda Hess wrote last summer, necessitated by the year’s establishment of the “cliff wife guy,” the “elf wife guy,” and the “fake wife guy.”…

But as Zhong’s shirt and the response to it have articulated, there’s a very particular kind of wife guy well-known to people of Asian descent, if not yet the rest of the world: the “Asian wife guy,” whose outward identity is formed not on his own culture but on his wife’s (or his girlfriend’s or his former partner’s). Through that relationship, the “Asian wife guy” absorbs elements of his wife’s culture, often reimagining himself as an authority on that culture.

For Asians, this isn’t just some joke t-shirt — it’s a statement against the objectification of Asian women.

More about this over at Vice.com.