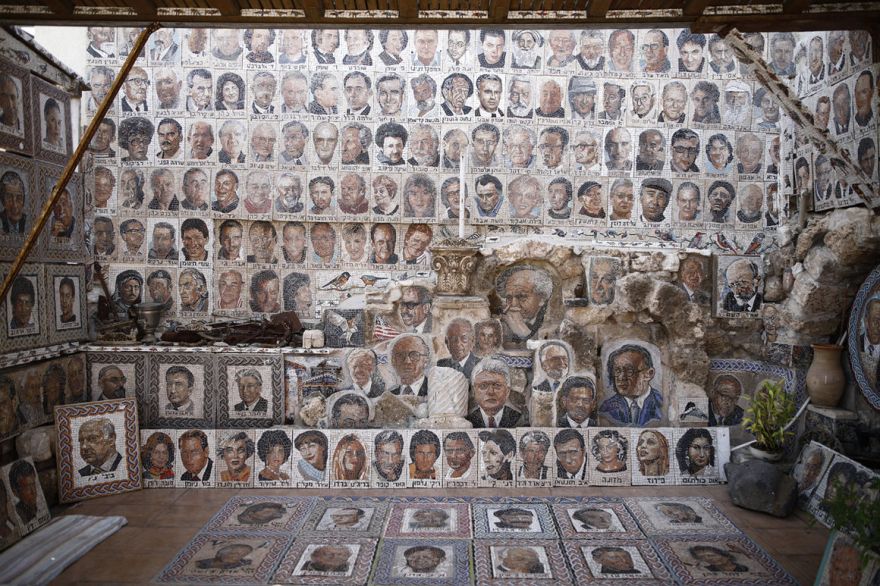 Yossi Lugasi spent over four decades creating mosaic portraits of famous people by smashing ceramics and placing it all over his home. He was able to complete over 1,090 mosaics in his lifetime. Lugasi never studied art formally, and created his mosaics with a technique that he developed himself. From portraits of political leaders to television icons, Lugasi poured his time and passion into creating the delicate pieces that now adorn all corners of his home. Atlas Obscura has the details:

He created the mosaics with a technique he developed himself: he made pencil drawings on an insect protection net covered with a special substance. He then glued on the mosaic stones, which were actually bits of tiles, ceramics, and construction waste that he collected and smashed to pieces.

“He would walk on foot from Jaffa to Tel Aviv and stand for hours in front of an art supplies store just to ‘fill up’,” with inspiration, Yaffa says. When he turned 13, as a bar mitzvah present, he went to visit his friends from the absorption camp back in the 1950s. The friends had moved to the poor ‘“development town” of Beit She’an. The camp was razed, and beneath it were found the remains of the grand Roman and Byzantine city Scythopolis and its many mosaics. As an adult, when he couldn’t find a place to store drawings that were vulnerable to the rain and sun, Lugasi chose as his medium the eternal mosaic, which, like in Scythopolis, never peels or fades.

Today, impossible meetings occur on Lugasi’s roof, under the strong Jaffa sun: Ben Gurion is watching Clinton and Elvis is staring at Itzhak Rabin. One could expect Lugasi to reject those people, the representatives of an establishment that marginalized him. Avi says his father did the exact opposite: He built a shrine to them, and so reclaimed power. “His creation,” Avi says, “complements his life story.”